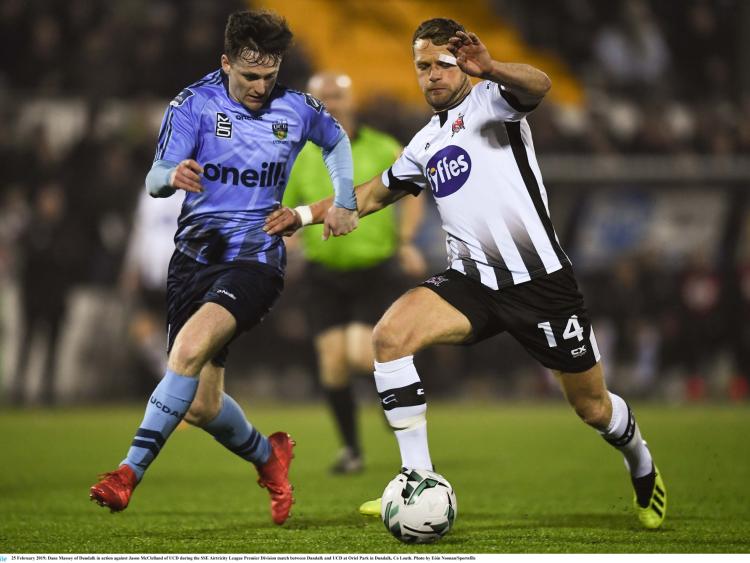 Goal-getter Daniel Kelly has stated Dundalk’s need to take it “game-by-game”, as they look to make it a Happy Easter when they face a difficult assignment at UCD on Monday afternoon (kick-off 3pm).

The defending champions have bounced back well from the club’s first back-to-back SSE Airtricity League Premier Division defeats in two years, by putting together victories over Bohemians and Finn Harps to move up to third.

One was lucky, one was comfortable, but they accumulated six precious points. The gap to leaders Shamrock Rovers has been closed slightly ahead of a huge week, which sees the Hoops come to town for a mouth-watering televised clash on Friday (8pm, eir Sport).

Dundalk must take care of capital business first, though. UCD may occupy second-bottom in the standings having lost all five of their away games this year. However, they have been a different animal on home turf.

The Students have won three of their last four outings at the college, including over Waterford and Cork City. They also could have been 2-0 up at Oriel Park in February before Vinny Perth’s side battled back to dig out their first win of the season.

That particular night heeds as a warning ahead of this Bank Holiday Monday meeting. “We need to take it game-by game,” Kelly said, after hitting an impressive hat-trick against Harps.

“UCD did really well against us at home. They’re a really good side; they keep the ball really well and they’re a tough team to break down. Monday is a huge game, as is Friday, but we’ll take UCD first and see what happens. Hopefully, we’ll be able to get another three points and a clean sheet.”

Kelly admitted that his second goal last Friday, in the 47th minute, was a much-needed boost for the whole team as they quickly put Harps’ challenge to bed after the restart.

The former Bray Wanderers and Bohemians winger said: “It was a good time for us to score. We knew at half-time that we needed to get a couple of goals to kill them off. We played with more confidence after that because we knew we had the 2-0 lead.”

Kelly’s cameo against his old club Bohs last Monday – where he won the last-gasp penalty – had been enough to return him to the lineup against Harps. That was his eighth league start of the season, and with four goals now to his name, he has proved an important player in the early stages of the Perth era.

“I’m absolutely loving it here,” Daniel said. “The lads, the coaching staff and fans have made me feel so welcome. It has been excellent. Full-time football is going really well. I was working last year and part-time football with Bohs, so it’s a lot different.

“The set-up here is excellent and the standard in training is unbelievable, so you have to be at it all the time. We’re doing really well – we’ll just keep going now.”

Monday is Dundalk’s first league trip to the UCD Bowl since September 2014, when Richie Towell and Patrick Hoban scored in a 2-0 win.