INSIDE TRACK | League offers Louth’s only hope of success; Saturday's clash with Westmeath is huge 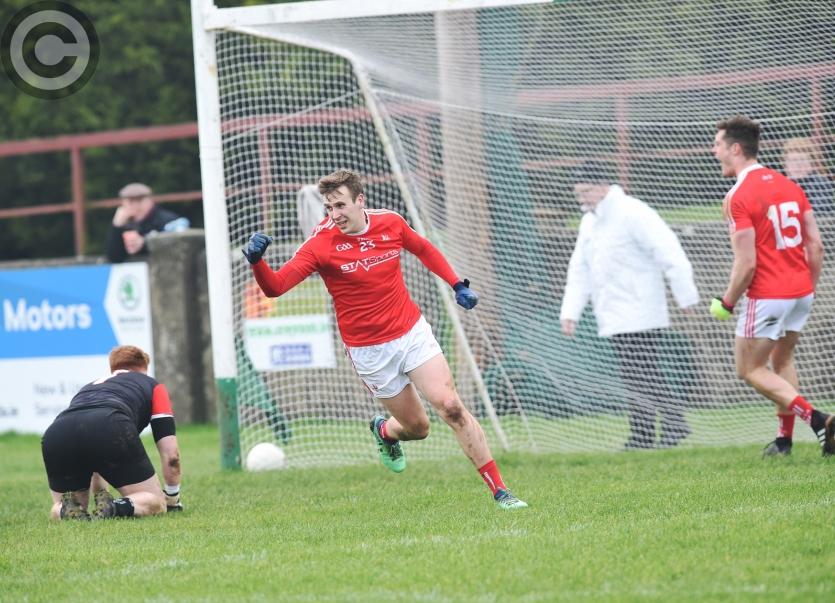 Louth's Eoghan Duffy scores a goal in the defeat of Sligo at the Gaelic Grounds three weeks ago. (Pic: Arthur Kinahan)

The 2019 inter-county season might still be growing, but before it leaves its childhood Louth senior footballers will have either chalked up a significant win or be biding their time for the next real chance of making progress. What happens over the next fortnight will be defining.

Two league matches remain, the first for the Reds coming on Saturday afternoon next at Drogheda. Westmeath are in opposition, and if the two points are kept at home it really will be game on for the following week’s meeting in Newry with current table-toppers, Down.

Assuming Offaly, presently keeping company with the already-doomed Sligo, continue to struggle – or, at the very least, fail to pick up full points from their last two matches – Louth won’t be relegated. That, as many would have seen it at the beginning of the competition, could be counted as a result. Already there have been a couple of very good wins and another of the lucky variety, and with six points on the board, the focus is now on  promotion.

Should Louth go up it will be quite an achievement, the very best that can be taken from the season. The championship might yield an opening round win, but going on all known form, that’s as much as can be hoped for in Leinster. Waiting for the winners of the game with Wexford are Dublin, raging hot favs to win the provincial crown for what seems the 156th time, and the team all others with All-Ireland aspirations have to beat. If it materialises, a Portlaoise outing, regardless of how it results, wouldn’t be the end of Louth’s championship road. The qualifiers follow, and they can be one of two things – another agony or a decent extension to the summer season.

But let’s leave the knockout aside. What’s ongoing is the season’s biggie, offering the only realistic hope of 2019 success. The availability of Derek Maguire and Ryan Burns would strengthen hopes of a win over Westmeath, but just as important as a return of the Young Irelands and Hunterstown footballers would be having  the Gaelic Grounds populated by a big home following. It’s known that players respond when there’s encouragement coming from the pitch’s surrounds.

In return, fans would be looking for scores, good defending and, most important, discipline, a show comparable to what was there in the rout of Sligo a fortnight ago. There might, just might, be 10 points on the board had all of the games played so far ended with 15 red jerseys on the field.