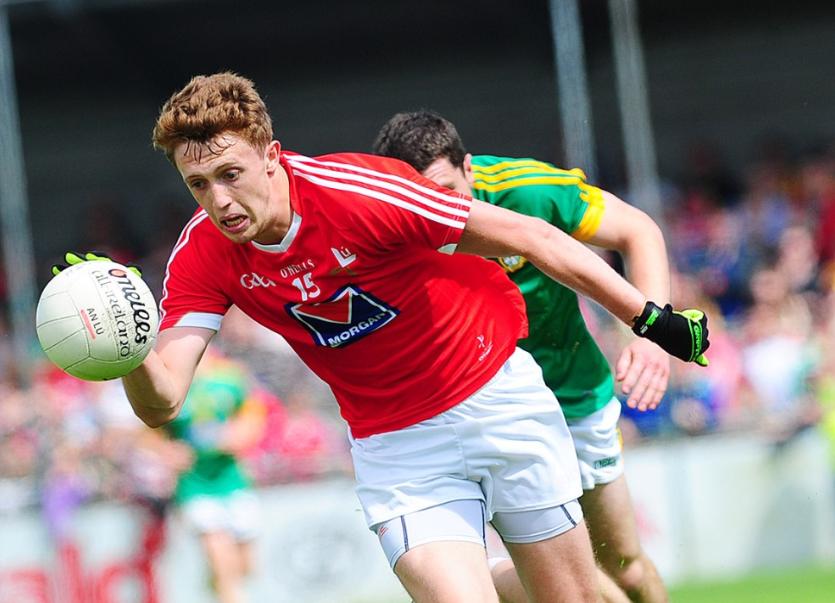 Ryan Burns could return to the Louth team for Saturday's clash with Westmeath in Drogheda. (Pic: Arthur Kinahan)

Wayne Kierans admits there is a lot at stake this weekend when Westmeath visit for what will be the biggest match of the Louth manager’s reign to date.

Victory over Jack Cooney’s side would put the Reds in pole position to secure an immediate return to Division Two. Indeed, should other results fall favourably, a win could all but see the Wee County book a Croke Park final berth with a match to spare.

But, on the other hand, defeat would end their hopes of a third promotion in four years.

“It’s a high-stakes game, there is no getting away from it,” Kierans told The Democrat.

“But what’s really important for us is that we right the wrongs of the performance we gave against Carlow.

“We’re looking to get our performance level back up and that the naivety and lack of discipline in our game is put right. That’s the focus.”

The Louth boss is hopeful of having Ryan Burns and Conor Early available following injury layoffs, while Derek Maguire has impressed since returning to training. However, forwards Conall McKeever and Rúairí Moore are among those set to miss out with respective knocks.

Kierans’ team’s discipline will have to improve for Saturday’s match with the Wee County having finished only one of their five league outings thus far with the full complement. It’s a point he accepts, but says that it’s an issue not totally within their control.

“It would be better if we could finish the game with 15 players, though sometimes that’s not within our control.

“Whether it’s a concern overall, there have been some incidents where the guys have deserved to attract the attention of the referee and some that they haven’t.

“We did speak about it, but I don’t think it’s a concern and I don’t want to take anything away from what the guys are showing in the games and the intensity of it.”

On his three-month suspension, five weeks of which have already been served, Kierans acknowledges the situation is not ideal, but says that he is “respecting the disciplinary process”.