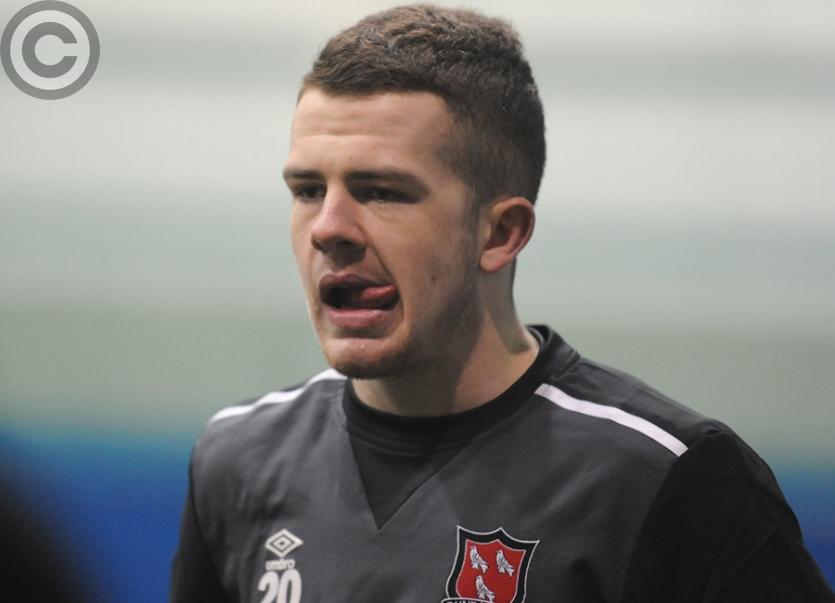 There was a distinctively local flavour to the St. Stephen’s Day ‘Mourne Ultimatum’ involving Warrenpoint Town and Newry City in Milltown. A clash of two of the Irish Premiership’s bottom four, its liveliness was added to by the fact that Louth men assumed central roles.

Five former Dundalk FC players lined out; one scored, another claimed Man of the Match; a third was dismissed; while Simon Kelly skippered Warrenpoint, aiding the attack as they desperately chased an equaliser in the dying embers.

With Anton Reilly off the park - having received a second yellow in conceding the penalty from which Newry took the lead, for the second time, shortly after half-time - it was interesting to note that the other four were integral to the leveller.

Substitute Emmet Hughes - released off the books having failed to break into Stephen Kenny’s first-team - hoisted, left-footed from the flank, to the edge of the area, where Kelly was positioned to flick it on, or attempt to, at least. Ciarán O’Connor was next to get involved, revelling in the thick of a scramble and while his scampering proved profitable for Deane Watters - who stabbed home a 93rd minute goal - the Man of the Match was left stricken across the deck, and was subsequently helped off.

Manager Stephen McDonnell, who continues to flourish in management, perhaps influenced by the lessons of a season under Kenny at Oriel Park, took flight onto the pitch in celebration, with ‘keeper Aaron McCarey - who is due to join Dundalk in January - joining his team-mates in the dressing room corner of the ground.

Amidst the pandemonium, where emotions contrasted between separate elements of the approximately 1,200 present, Omeath’s Jimmy Walker stood as one of the crestfallen Newry brigade, hands on hips.

A worthwhile escapade north, but one which made you wonder: is this the route local footballers must now take in order to stay in the game?

GLASS CEILING
O’Connor is probably best placed to respond considering he was on the periphery of Dundalk’s three championship-winning panels from 2014-’16, without being able to grow his role as his development continued.

He had loan spells with Derry City, Warrenpoint, Finn Harps and Bohemians, but on every return his brief was the same: on the bench one week, out altogether the next. For a promising player in his young adult years, it wasn’t the ideal scenario and drained his love of the game.

“Stevie (McDonnell) has given me that role where I can go and enjoy myself,” he says.

“I’ve probably never enjoyed myself - apart from at Derry when I was 17 - since I came back. I wasn’t playing, I was in and out of squads, even at Finn Harps, with injuries and fitness problems.

“Stevie has got me as fit as I can be, I’m enjoying my football and, to be honest, I’ve no interest in leaving here any time soon. It’s a great place to be.

“I played with Emmet and Deane Watters at 19s level at Dundalk and with Simon Kelly and Marc Griffin (out injured at the moment) in the first-team; there are a fair few of us and we have that bit of combination play during games that people mightn’t automatically see.

“It’s good to have locals here and there are a lot of Belfast lads involved too. There are two groups, but two groups that get on very well and enjoy it.”

Watters has found it equally as positive, having the opportunity to play first-team football in his preferred midfield position - well before his 21st birthday - has brought him on. Compared with Dundalk’s seniors, it’s a level dropped, but, he insists, the standard is not much below the general League of Ireland pace, even if it is more physically challenging.

Featuring for the ’Point involves three training sessions per week and allows him to continue the sports degree he enrolled on at DkIT while under contract at Dundalk.

But, for both players, there is the disappointment - even if they are reluctant to admit so - of their treatment by the Lilywhites. As juveniles, with the first-team stakes being so high, it’s as if they’re encountered by a toll booth with an insufficient bundle of coffers to progress.

Brian Gartland said before the FAI Cup final that if young, local players are good enough the opportunity to play for Dundalk will follow, something which O’Connor accepts to a point: “I’m not saying Stephen Kenny didn’t give any locals a chance, I’m sure he does give people a chance, he gave my brother (Michael) a chance.

“There are chances there for local players to get back in at Dundalk, they’ve just got to be willing to work hard. Maybe Stephen saw something that we didn’t or we didn’t work on something that he wanted us to. Managers have different opinions on players.”

However, while Watters was keen to stress how much of an education it is to be involved with Dundalk’s first-team, it eventually comes at their own expense. Playing with the youth sides is more of a stay of execution, especially as there are no pathway grades, U21 or reserve.

“I don’t think there is a local player in the Dundalk team at the minute, which is a shame,” he adds.

“When you were going along with the other 19s there was a kind of airy feeling going around: ‘there is no hope of me getting into this team, unless I really kick on’, which is hard given the players that are around you.

“I was happy to be around the environment with Stephen Kenny and to learn off the players, I didn’t feel down, like: ‘I’m not going to get into this team so why am I bothering’. I just wanted to get in and learn so that I had a grounding to get into a different first-team if it didn’t happen for me at Dundalk.

“When my contract was up, I was hoping that there would be a bit of a helping hand from the club, which I didn’t get, unfortunately.

“There was a couple of us out of contract and knowing Stephen (McDonnell), he brought me up when Tippy (Matthew Tipton, another ex-Dundalk player) was in charge. We were up for a few training sessions and they took us on, but it was really Stephen’s influence that got us here.

“He wanted footballers who could play football, not just make it about lumping up the pitch. He had an idea for me in midfield and it’s worked out.”

THE FUTURE
Neither are overly aware of what the future holds. Playing for Warrenpoint provides them with stability and a chance to grow their career prospects within a conducive environment, but their aims are perched higher.

O’Connor’s brother, Michael, is a regular in a Linfield team competing for the Irish Premiership title. That is surely the level the pair will aim for next. As Watters says, “there are opportunities up north”.

On a lighter note, opposing his younger sibling adds another layer of attractiveness to O’Connor’s current arrangement.

What is it like on the morning of a game, where they’re in opposition, I ask?

He replies, with typical devilment: “Well, I’ll tell you what, I don’t speak to the Michael O’Connor fella anyway!”

Have they come into conflict, has he “had a nibble”?

“Not yet, but the next game there’ll be a tackle!”

Banter, of course, but the quandary is real. Playing with the team they support - and Dundalk’s unforeseen success - has come at a cost, some may say.

Worryingly, Warrenpoint has become a refuge for the local academy’s orphans.