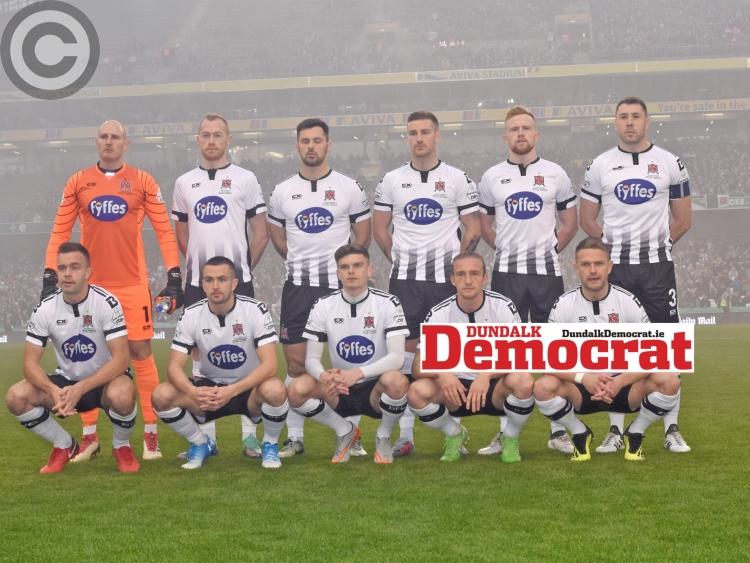 IRISH INDEPENDENT
The Indo’s back page was dedicated to Stephen Kenny, featuring a headline to accompany Eamonn Sweeney’s column calling for the Dubliner to be installed as the next Ireland manager - ‘DUNDALK DOUBLE PUTS KENNY IN LINE FOR IRELAND CALL’.

Sweeney pointed to the success of Michael O’Neill as manager of the North, having previously managed Shamrock Rovers to some domestic success, while referring to the fact that Jim McLaughlin never received the recognition that his feats in management deserved. “Let’s not make the same mistake with Stephen Kenny,” he warned.

The paper’s soccer correspondent, Daniel McDonnell, an Ardee native, opened his match report poetically: “The emotion in Stephen Kenny’s full-time sprint in the direction of the Dundalk supporters was borne from the pain of past experiences.

“He admitted afterwards that he couldn’t face the thought of another miserable trip out of the Aviva.”

THE IRISH TIMES
‘KENNY PRIVILEGED TO CATCH ANOTHER SPECIAL MOMENT,’ was the headline on Emmet Malone’s reaction piece in The Irish Times.

“Not all of the Dundalk fans had stuck around long enough after their side had been presented to hear Stephen Kenny being interviewed somewhere in the smoky haze that had enveloped the pitch.

“Between the champagne soakings inflicted upon him by Pat Hoban, Kenny seemed to be struggling to contain the emotion of it all.”

The piece resided beside a picture of Kenny at full stretch, with the knees of trousers dirtied following his exuberant, knee slide celebration when Patrick McEleney struck the winning goal.

IRISH EXAMINER
It was ‘STEPHEN’S DAY’ at the Aviva Stadium on Sunday, as per the Irish Examiner’s sports pullout front page.

“And so the league champions are now also the cup holders, Dundalk confirming another changing of the guard in Irish football,” wrote Liam Mackey, who also praised the FAI’s ticketing ploy in attracting over 30,000 to the decider for the first time since 2010.

John Fallon also called for Stephen Kenny to be the next Irish senior team boss: “What screams aloud from Kenny’s CV, not that he’s one to gloat, is his feat of nurturing budding senior internationals.”

THE TIMES
“Without yet hitting 50, Stephen Kenny has had 13 future internationals under his tutelage and another prospect, Patrick McEleney, delivered yesterday to secure his latest domestic double,” was the opening line of John Fallon’s report.

The paper also included a reaction piece from the winning manager, who hit back at his opposite number, John Caulfield’s claims that Dundalk’s American investment will allow them to dominate Irish football for some years to come.

THE IRISH NEWS
'DUNDALK DOUBLE UP AS MCELENEY MAKES HIS MARK,' read The Irish News’ headline. They claimed Patrick McEleney “wrote his name into the history books” with his 73rd minute winner and included some reaction from the Foylesider in their coverage: “I haven’t had great memories here. I’ve won one and lost a few.”

THE SUN
The Sun’s back page was dominated by Dundalk’s ‘Cup win. Owen Cowzer’s interview with Patrick McEleney - in which they say he felt like “he was starring in a movie” - is carried under the headline: 'YAY MCELENEY - PATRICK USES HEAD FOR CHANGE'.

Neil O’Riordan chatted to Dundalk’s Michael Duffy about his international aspirations, a story which also made the back page.
They awarded man-of-the-match to Seán Gannon, who received an 8/10 for his showing.

IRISH DAILY STAR
The Lilywhites also made the back page of The Star, with Mark McCadden writing about Michael Duffy’s international prospects, as well as Pat Dolan following a familiar line and calling for Stephen Kenny to be installed as Irish international manager.

Paul Lennon awarded Chris Shields with his highest rating, an eight, with match-winner Patrick McEleney receiving a seven - the same as Duffy.

Another piece, with Cork centre-back Alan Bennett, went under the headline: 'BENNETT WARNS LILYWHITES THAT CORK ARE FAR FROM BEING DUN’ YET', while McCadden said the FAI should set a target of filling the Aviva Stadium for the 2021 showpiece on the back of the decider’s largest attendance in eight years.

IRISH DAILY MIRROR
'DOUBLE DELIGHT,' was the headline on the Mirror’s back page, with Michael Duffy claiming that “he got a bigger thrill winning the FAI Cup yesterday than from clinching the league title.”

Paul O’Hehir wrote in his report that “Patrick McEleney usually makes headlines for scoring outrageous and audacious goals”, as opposed to a scrappy header.

The paper’s soccer writer also claimed that it was “a game worthy of the occasion”, while Paul Buttner centred his piece on Cork manager John Caulfield’s defence of left-back Shane Griffin, who conceded the possession which led to Seán Gannon providing for McEleney’s winner.

THE HERALD
Aidan Fitzmaurice wrote: “Dundalk have hoovered up trophies in the last five years but there was something about the manner of their latest success, an FAI Cup final defeat of their (very) close rivals Cork City which gave the Co. Louth club a smile which seemed even wider than usual.”

An interview with Patrick McEleney was carried on their back page.

IRISH DAILY MAIL
“MCELENEY’S DUNDALK’S HEAD BOY,” was the headline of the Daily Mail’s back page.

The paper awarded sevens to seven of Dundalk’s players; no Cork man got above six.