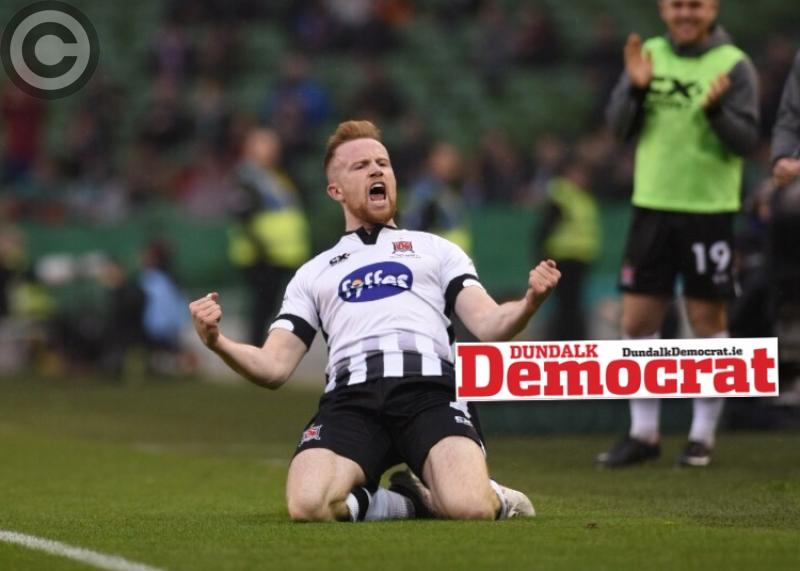 Patrick McEleney, a Dundalk FC legend for now and forever.

The Foylesider’s 73rd minute header proved the match-winner in this afternoon’s FAI Cup final at Aviva Stadium as Dundalk completed the double for just the fourth time in their history.

It had looked as though extra-time may be required for the fourth year in a row as Cork held firm, despite Dundalk’s dominance increasing as the second period progressed.

But McEleney ghosted into the area to meet Seán Gannon’s perfect right-wing delivery; his goal earning the champions the 11th ‘Cup of their illustrious history.

Seán Hoare - chosen at centre-half in place of Daniel Cleary - was the game’s central character, putting the Lilywhites ahead on 19 minutes, only to give away the penalty from which Kieran Sadlier levelled just two minutes later.

In the most entertaining of the teams’ four ‘Cup finals, City had the better of the first half as Dundalk’s attackers struggled for impact, Michael Duffy apart.

The No. 7’s set-piece deliveries were the winners’ likeliest avenue to goal and from the left, his corner was met firmly by Hoare to put Stephen Kenny’s men ahead.

Former St. Pat’s man Hoare became the first player to score in regulation time of the final since 2014. His delight was there for all to see as he wheeled away in celebration; however, his joy quickly soured as he needlessly bundled over Karl Sheppard, despite the Cork striker veering outside the area.

Referee Neil Doyle was left with little choice but to point to the spot with Sadlier stepping up to fire beneath Gary Rogers.

A high tempo game which moved from one end to the other, Cork continued to hold the initiative for lengthy spells as Dundalk’s forwards laboured, with the exception of Duffy who provided for Brian Gartland shortly after Sadlier had levelled.

The Dundalk skipper’s nod had McNulty well beaten, only for Shane Griffin to clear off the line - it was a major moment in the overall context of the affair.

Indeed, as the Leesiders took a grip on the game approaching the break, Dundalk’s defence were forced to scramble clear after Rogers had failed to hold Garry Buckley’s rasping drive.

The interval seemed to come at a good time for the league champions; they were more assertive on the restart and twice forced McNulty into action. Firstly, Robbie Benson’s flicked header was parried out by the Cork ‘keeper, with Seán McLoughlin clearing from the feet of Patrick Hoban, before the latter’s powerful shot was tipped around the upright.

As the holders tired, Dundalk continued to build attacks and from Gannon’s outswinger, McEleney picked his spot in the net to send the large Lilywhite congregation into raptures.

But, before the celebrations got underway, Dundalk were thankful to their ‘keeper, Rogers, for pulling off a fabulous tip-over save to deny Sadlier, whose rangy effort knicked off Chris Shields.