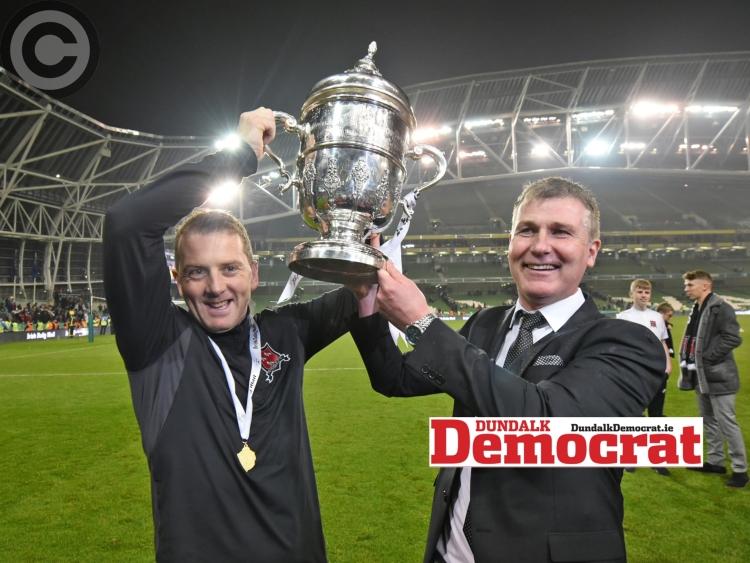 There is an opinion floating around amongst the veterans of Dundalk FC followership: It is that Stephen Kenny and Jim McLaughlin are one of a similar kind.

Sunday’s FAI Cup final win - Kenny’s third as a manager - moved the current Lilywhites supremo on to eight major trophies at the helm, and level with McLaughlin. He has entered that exclusive club of heroism with the potential to continue scaling the summit of Irish football.

But the McLaughlin comparison was something Kenny was keen to shy away from, rather, he was eager to emphasise the achievement as that alone as opposed to a personal triumph on a wider scale.

“I know Jim and his family, Jim is a legendary figure,” Kenny said on Sunday evening.

“It’s not something that motivates me - to try and equal his number of trophies.

“It’s just about creating brilliant moments, big moments, European nights, league wins; the moments are just incredible when the work that everyone puts in and everything that everybody sacrifices culminates in something really special.”

No doubt, last weekend’s occasion at the Aviva Stadium was special.

“The atmosphere in the stadium was just incredible, more so than in the previous finals. It was absolutely incredible and all the supporters really engaged with the match.

“It would have been difficult to face going up the road without it. I couldn’t have even started thinking about it because it’s our second double and we should really have three doubles.

“The whole region emptied out and got behind the team. People wondered if there would be fatigue - some of the supporters had to suffer losing two. To have the level of support that we had was amazing.

“We’ve won and lost here. When you lose, it’s a lonely place, but to win it, playing well; the euphoric nature of winning is incredible.

“It is very special and it’s a privilege to be a part of such a great team.”

One of the swaying factors in the match was the introduction of Jamie McGrath during the second half. The Meath man offered the Lilywhites a creative spark and it was much to do with McGrath’s ingenuity that led to Patrick McEleney finding the winning goal on 73 minutes.

“We just needed something different tactically to free Patrick (McEleney) and Robbie (Benson).

“We were then very flexible. It could be difficult to assess who was playing where in that period. They were all just interchanging positions and that helped us.

“I wouldn’t be claiming massive credit for the substitution, though,” Kenny added.