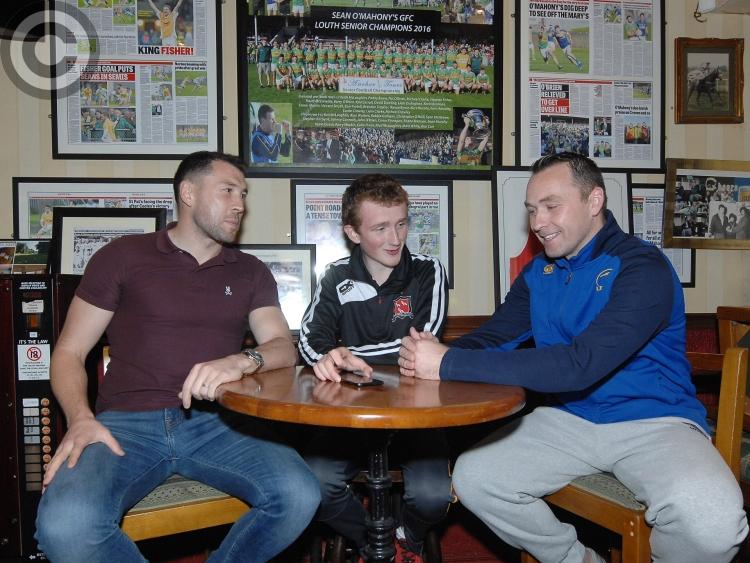 There is framed Sean O’Mahony’s memorabilia on every wall of Clarke’s Bar, Quay Street. It’s the club’s hub, just a stone’s throw away from their playing field.

One panel is particularly plastered, headlining their senior championship win of 2016, their one and only time to have lifted Joe Ward.

Brian Gartland will captain Dundalk FC into Sunday’s FAI Cup final, wearing number three. Right-footed, he takes the stool to your writer’s right. David Crawley, the trophy lifter in 2002, was a previous holder of the ‘3 shirt’. Left-pegged, he sits across from Gartland. It seems apt.

And then there is the O’Mahony’s link, as well as the fact that they’re both defenders and have black hair. They’ve both won leagues and played in Europe. Crawley has held the FAI Cup aloft… Too soon… Sunday...

“Brian is part of the O’Mahony’s club now and one day he’ll make his debut,” Crawley says with a smile, as if comparing the Point Road side to Oxford’s Wednesday Club, where membership is premium.

“I don’t know if he’ll play full-forward, Conor (Crawley) might still be there, so he might play midfield.”

“We could have two full-forwards,” Gartland replies.

Married to Bronagh, daughter of O’Mahony’s chairman Pat, Gartland is following in the footsteps of Crawley, immersed in a GAA club with a rich tradition of producing dual players.

“I was down with Willie (Crawley) and Pat the other day, walking and talking. When they were playing they were considered: ‘ah, you soccer players’. It sounded like they weren’t liked for it in GAA circles,” Gartland explains.

“They had Paul McLaughlin, Barry and Martin O’Brien, Willie (Crawley) and Martin Connolly. There are more. O’Mahony’s were considered ‘soccer boys’.”

David adds: “O’Mahony’s were always a ‘soccer club’ and then when John O’Brien came back from Louth, it got really professional and the days of not training and playing were gone. That’s why they have won so much this last couple of years.

Now October, they met in Clarke’s when the season was still young. Sickness and injury had affected Gartland’s beginning to the campaign. Would he get back in, at 31? There were doubts.

But doubts are familiar to Crawley. It could have been so different in 2002. He recalls during a sticky spell Ollie Ralph and Martin Murray considering removing his captaincy. There would have been no lifting the ‘Cup.

“I was just telling him: ‘you’ll get your chance’ and he has, and he’s taken it and hasn’t looked back.”

Taking chances is another trait of Crawley’s. He rates his decision to leave Dundalk and join Shelbourne, a full-time set-up, as a gamble taken. But it yielded fruit, winning league titles and playing in Europe, including against Deportivo at Lansdowne Road in 2004, a match Gartland remembers watching from the stands.

Playing at the national stadium is a draw. Gartland was there in 2012 to see Derry City defeat St. Patrick’s Athletic in the FAI decider. A player with Portadown at the time, immediately, his mind was made up. He was coming back to the League of Ireland, “just to have the chance of playing at the Aviva.”

He spent time with Johnny McDonnell at Shelbourne and spoke to Mick Cooke at Drogheda United, dealing with both on one particular day before seeing a voicemail from an estranged number. It was Stephen Kenny.

“I have this thing about not rushing into decisions having been ‘done’ a few times when I was younger - never make a decision there and then.

“The plastic pitch and the travelling, I’d set up the business and I was like: ‘do I want to be doing this again.’ In the end, it was ambition. On the Monday I went up and signed.”

CHANGING TIMES
Times have changed. Whereas Dundalk will stay in Dublin on Saturday, the class of ‘02 were at home the night before.

Crawley remembers it, watching Match of the Day, feeding his eldest child, David, midway through the night.

“I wouldn’t tell Stephen Kenny that if you were there now,” Gartland quips.

Even the homecoming. The summer was being welcomed as Crawley and co. made their way over Hill Street Bridge with the ‘Cup on show. The scenes, the adulation, the ecstasy. It brought him back to his childhood, when Barry Kehoe and Dessie Gorman were on their victory parade, Crawley clamouring to get their final ties as a momento.

The setting is now winter. In 2015, it was late by the time they made that hallowed trek down the Dublin Road. It was different, but equally as significant and special.

They’re heroes. Crawley was what Gartland is in 2002. An idol.

“But I’m going home tonight and I’ll tell my young fella that I was up with Brian Gartland and he’ll be amazed. They just look up to them.

“As a local, it was brilliant to play for Dundalk and follow Willie. I grew up going to the games with my mother and watching him.”

To which Gartland utters: “When Grimesy (Shane Grimes) was with us, I saw what it meant to a local lad to be playing. He grew up following Dundalk.

“If young local lads are good enough and have the right attitude, they’ll be picked. That was Grimesy, his attitude was spot on every time he was called upon.

“There are no dickheads on the team and you appreciate what’s in front of you. The core behind us is that we have good people, not just good footballers.”

The losses in 2016 and ‘17 were “horrible”, particularly the former defeat. Seán Maguire having popped Dundalk’s ‘double-double’ aspirations with a shot which ended in the net via a nick off Gartland.

Defeat this year would be especially disappointing as his mind has strayed towards what it may be like to lift the trophy in the Aviva’s grand-stand. “It’s running through my head.”

That is if Stephen O’Donnell doesn’t make it, he hastens to add.

Gartland has the taste for lifting trophies, after hoisting the league silverware.

“It was a surreal moment and it’s something that I’ve been building up to for so long. Every year we’ve been lifting trophies, in your head you just want to be that person who’s lifting it. It was a dream come true.

“When you lift a trophy, there is nothing that (goes through your head). It’s just that buzz and euphoria."

Crawley raised the ‘Cup as a Lilywhite to the core.

“You’re just lifting it and there are 10 hands coming to pull it off you. It’s crazy, it’s great. It’d be my dream to be still playing with Dundalk.

“I really hope Brian lifts it because if he lives here for the rest of his life, he’ll always look back on it.”

But the ‘Cup, between now and Sunday, remains in the future. Dundalk are just ‘a grand auld team’, not a double winning one - yet.