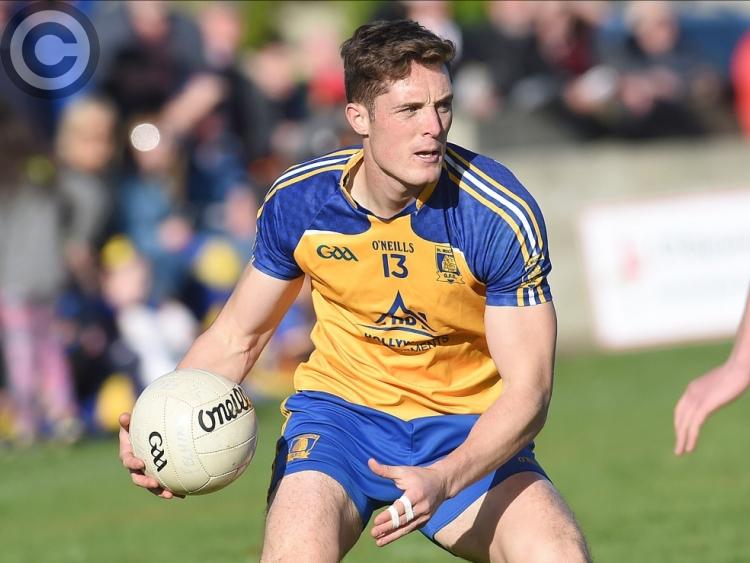 Philip Englishy’s first half goal proved vital, but Declan Byrne was again St. Mochtas’ match-winner as the Louth Village side booked a place in the Leinster intermediate quarter-final on Saturday afternoon.

The Louth forward finished the Ardee encounter with Longwood on seven points, three of which came in extra-time, showing the type of leadership qualities which guided his side to the county crown. His last score, an incredible point from a sideline kick, saw him touch the sky in delight as all in yellow and blue rejoiced. Minus Eamon O’Neill (honeymoon), Jamie Farrell (suspended) and Ciarán Byrne (injury), this was some effort by Seamus McGahon’s men.

They laid the groundwork for their win in the first half, scoring three of the opening four points - Ciarán McMahon, Barry Mulholland and Byrne on target - before full-back Englisby finished to the net after Longwood ‘keeper Gary Heneghan had palmed Stephen McCooey’s shot off the ‘bar.

Mochtas’ No. 14, McCooey, scorer of a goal against St. Fechin’s a fortnight ago, spurned three major chances as his team dominated the early period. And those missed opportunities allowed Longwood to feel their way into proceedings without having an insurmountable deficit to negotiate.

Englishby’s goal put four in the difference, 1-3 to two, but a Byrne free was all Mochta’s could muster over the final 12 minutes of the half as Longwood closed to within a point at the turnaround - wing-back Karl Ennis scoring twice as the Meath champions took a territorial grip on the affair.

Indeed, Mochta’s were in danger of retreating too much, leaving only McCooey in the attacking half at times, a formation in contrast to their usual, offensively-minded set-up.

Anthony Healy, midfield for the men in white, wasted a glorious goal chance in the run into half-time and had he converted, Longwood would have taken a deserved lead. Nonetheless, they were ahead within four minutes of the restart as Healy and Aaron Ennis shot over in quick succession, before the game’s standout performers, Byrne and Ryan Moore (Longwood), notched their third and second points, ensuring the visitors led entering the final 10 minutes.

Byrne levelled the teams for the fourth time before McMahon nudged Mochta’s in front from range. It was a cushion they held past the 60 minute mark, but Moore dramatically forced extra-time, firing over left-footed from an acute angle - a point which warmed the heart on a bitterly cold afternoon.

The first of the additional periods was a slow burner with a Byrne free the only register. Moore tied the game with another spectacular point, but Mochtas’ leader came to the fore, converting another dead-ball with four minutes to play, prior to landing one of the finest scores Páirc Mhuire has seen, from the left-hand touchline with the outside of his right boot.

Captain Darren McMahon referred to it as a “typical winter game” and it was, with the closeness of the affair about all that kept the spectators interested. Not that Mochta’s cared. Nine years after succumbing to Longwood in the Leinster junior final, they gained some sweet revenge.