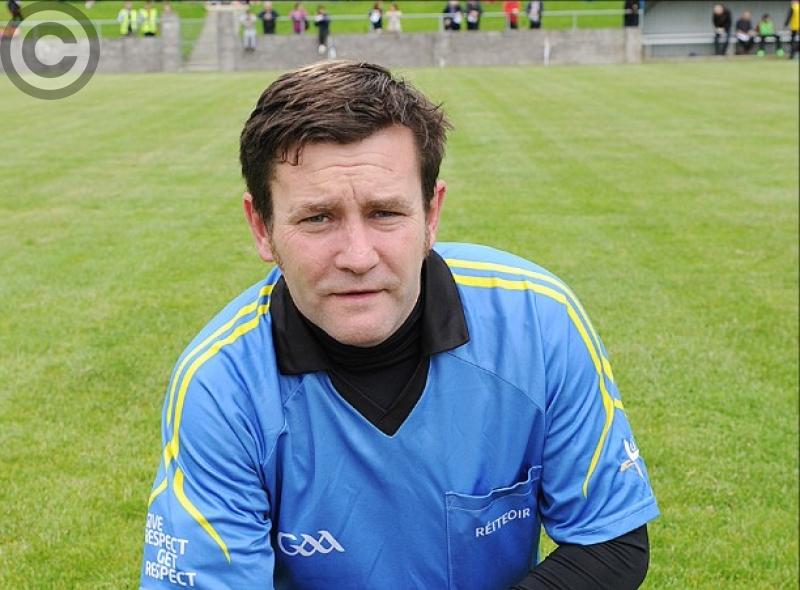 The first time he will oversee the county’s showpiece occasion, the O’Connell’s man, who is 10 years refereeing, says the appointment is the highlight of his career.

“It’s the next best thing to playing in the final,” he told The Democrat.

“My brother, Niall, I’d rather see him playing in one, but it’s definitely something I’m proud of.”

Since taking up the whistle, and following in the footsteps of Peter Bannon, Damien Murtagh and Christy Kearney, Conlon has presided over the junior 2A final (2010), U16 championship decider (2012), junior final (2014) and this year’s Sheelan Cup match.

However, he lists the 2015 minor championship final, involving Sunday’s clubs and many of the players, as being in his top three.

It is an early birthday present, of sorts, with Conlon, who still lines out for the ‘Bellingham junior team, set to turn 41 next week.

He played first-team football for 18 years, retiring ahead of 2012 and missing O’Connells’ intermediate success, when Niall captained the team. Though his career returned several league and MacArdle Cup triumphs, as well as underage honours, including a pair of U21 titles.

Grateful to his partner Leslie and two children, Jay (12) and Zach (5), for their support, Conlon will be helped by clubmen Damien Murtagh, David O’Brien, David Neacy and Anthony Agnew this weekend, with the quartet set to don the umpire cloaks.

Worthy mention goes to the aforementioned Bannon, Martin Mallon and Ian Sharkey, all of whom have helped him along the way.

He wishes both teams the best of luck and is hopeful of a “good, honest game of football.”