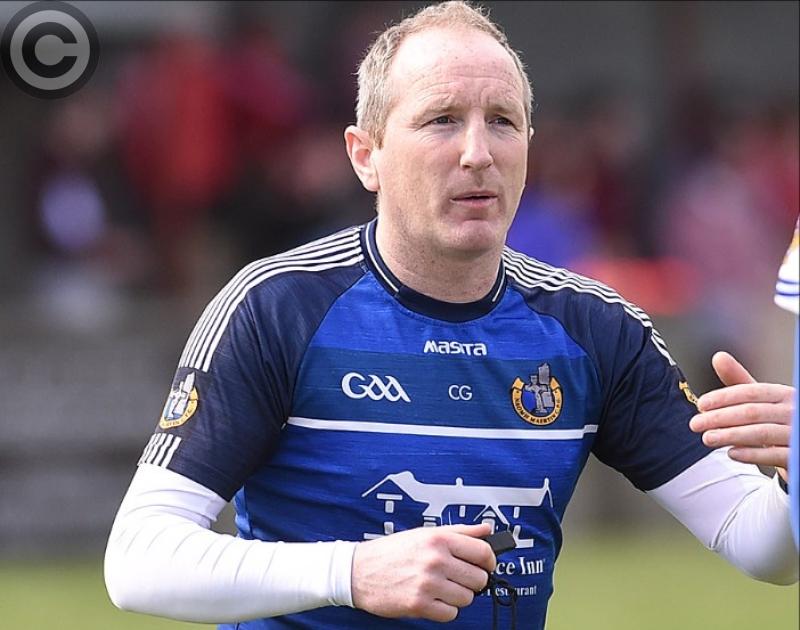 There is a moment engraved in Christy Grimes’ legacy as a four-time senior championship winner with Mattock Rangers.

Their 2010 semi-final with St. Patrick’s was of a titanic nature, score-for-score, tit-for-tat, no quarter given. But there was. Late on, Grimes was allowed the space to solo along the touchline before taking an inside route and booming over a point. Left-footed. It still brings a smile. A cracking effort from a once in a generation player.

Eight years on and he is still striding along the wing, with perhaps an extra pep in his step. He has more energy to sap.

Momentum is building in Monasterboice. Bunting is draped from tree bark to floodlight back to tree bark just past Donegan’s. Drogheda, the place where they’ll learn their fate, stands in the distance.

It’s new territory for Naomh Máirtín, but not Grimes. He has seen this before, playing in six senior deciders between 2001 and ‘10, three against Newtown Blues.

However, there is a twist. This time he won’t be able to pace the inside of the white line, rather he’ll be inches the irrelevant side, channelling his energy into rousing the troops he has trained.

“Everyone is saying the Blues are the best team in Louth and rightly so, they’re the senior champions,” Grimes says.

“But we’re going out to have a go at them and play the game on our terms. That’s what a lot of teams probably don’t do, they give them too much respect.

“Somebody has to win it, and as far as I can see it’s a 50/50 game. It’s on the day, who performs, who plays to their gameplan, who nullifies who and, ultimately, who scores more. This is the biggest day in Louth football and why you get involved.”

For all his gongs, games and greatness, typically, Blues have been a tough nut for Grimes - and Mattock - to crack. For the 2005 final win, there was pain in ‘01 and ‘08.

Though Mattock were always a confident team and the former Louth forward is a symbol of this, even with final novices under his care.

“Self-belief is key to a lot of things, you’re going out to win the match,” he utters with authority... no, assurance.

“The Cardinal O’Donnell Cup win last year was a major step for us. I remember saying that to Jim (Farrell - manager) at the start of the year. Last year, due to unforeseen circumstances with poor Benny (Reilly) I feel we would have been in the shake up, but we lost to the Gaels in the semi-final.

“The O’Donnell win was a stepping stone for us. The Blues are used to winning championships, it’s the way they progress. They think it’s the norm to compete and win championships, whereas we’re learning to get up to that level.”

Your writer: Was it difficult to get involved in coaching another club?

Grimes: “I knew this was coming…

“Collon being in a different championship was a major factor.

“I had been involved in a sort of player/coach role with Derek Walsh the year we got to the intermediate final (2016) and I found it difficult.

“So, when Jim rang me in December (‘16), I was thinking: ‘yeah, that’s a team that you could do something with’ and anyone who knows me, the first thing that I think about is ‘league and championship’. It’s the way I think and a lot of it is about how you think. There is no point in going out ‘half-arsed’. You give it everything and I knew there was a decent bunch of players there.

“I had seen them the year before against the Mary’s when they let an eight point lead slip. I knew we weren’t that far away. I knew there was potential.”

With time, he expects to become less animated during games, but no promises have been made ahead of Sunday. He’ll leather every ball.