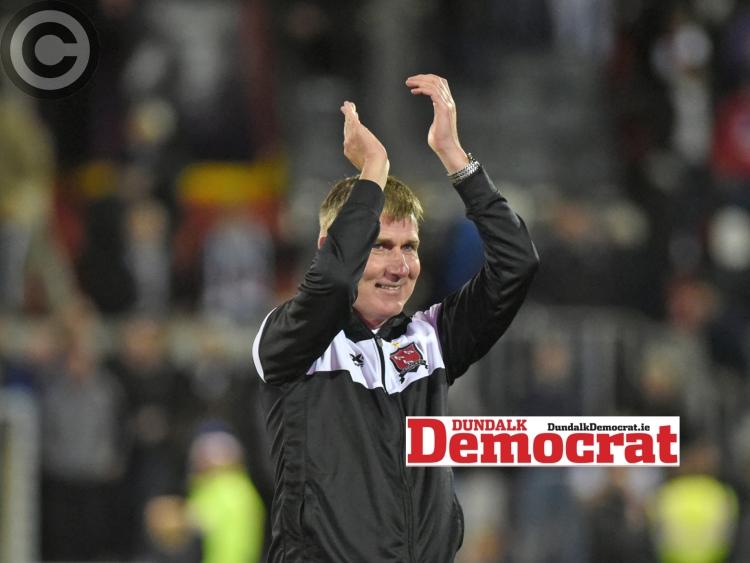 A title-winner in 1962/63, Callan is a regular at Oriel Park, having watched each of the Lilywhites’ four title wins under Kenny.

“Stephen Kenny’s record, I don’t think anyone comes near him except Jim McLaughlin,” Callan told The Democrat as the celebrations got underway on Friday night.

“I’ve been coming to Oriel Park for the best part of 70 years now and this seems a better era somehow, the crowd seem to be more involved.

“He’d (Kenny) have to be in the top three, if not number one. I think it’s between him and Jim McLaughlin for the number one spot.”

He credits the manager for instilling a relentlessness in his players, pointing to the title-clinching draw with St. Patrick’s Athletic, where Patrick Hoban bagged a late leveller, as proof of the team’s belief and character.

“I think this particular team, they just don’t know when to give up.

“They didn’t play that well tonight, but the effort was tremendous. Even when they made a mistake they were busting a gut to try and get back, and it’s not any one or two players, every player seems to have the same attitude.

“That is down to the management team keeping the team focused. Some of the teams I played on with Dundalk, there wasn’t a manager. When I started here in the old pitch, there was a railway carriage where the team was picked, it was the committee room. The showers were beside it and if you went to the end and put your ear to the wall you could hear the team being picked.

“There were several on the committee, there was no manager in the old days, one of the committee would come in and tell us to ‘work hard…’. It’s much more sophisticated now.”

Callan, like Hoban, scored the equaliser in Dundalk’s decisive game in ‘63, in his case, the equaliser against Bohemians at Dalymount Park. They had to wait for others to finish their campaign before being declared champions, Cork Celtic for one.

Thus, he was delighted that Dundalk were able to do it themselves, despite being on course for the championship due to Cork City’s stalemate in Tallaght.

Asked how he was feeling when leaving the ground, Callan said: “I feel wonderful. It’s great to see it and I know how the players feel. It’s every young footballer’s dream to win the league title.”