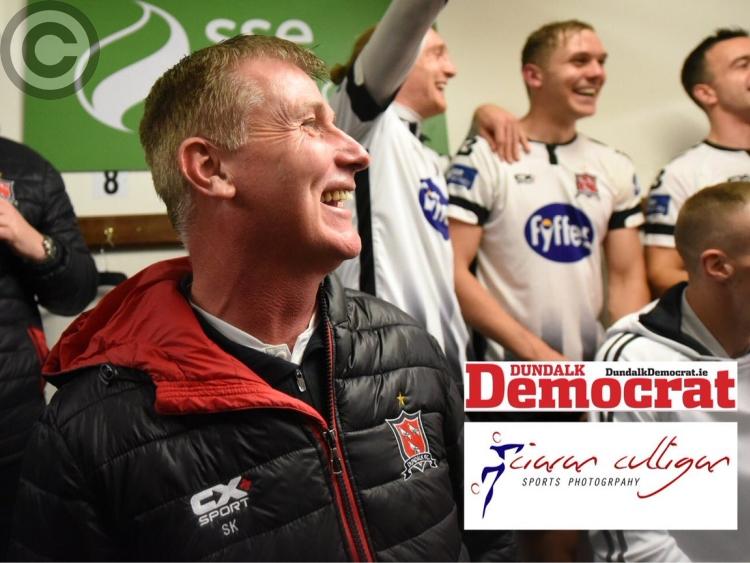 Top-scorer Patrick Hoban became the first League of Ireland player to breach the 25-goal mark since Brendan Bradley hit 29 for Finn Harps in 1975 by firing the leveller in stoppage time.

The goal sent Oriel Park into raptures as it meant the Lilywhites were crowned on behalf of their own efforts, though Cork City’s scoreless draw with Shamrock Rovers would have made them champions anyhow.

But for Kenny, who has now won the Premier Division five times, it was a night to remember.

“The way the game itself went, getting the last minute goal, there was great excitement and it was a great way to win it,” he said.

“It’s unusual because there has been a sort of an inevitability about winning it. It hasn’t been about one big game or a crescendo.

“Because we needed a point, had we lost tonight it would have been a bit anticlimactic so it was great to get that goal and it’s appropriate that Pat scored it.

“He’s been involved in all the late goals here and even the OGs, there were one or two OGs that were late but he forced them by being at the back post.

“We’re glad to get the late goal and for our supporters to enjoy it. It makes it fitting, the night itself.

“They’re a terrific group of players to work with, they really are.”

FOR MORE REACTION, SEE TUESDAY’S PRINT EDITION OR KEEP UP-TO-DATE ON OUR WEBSITE.