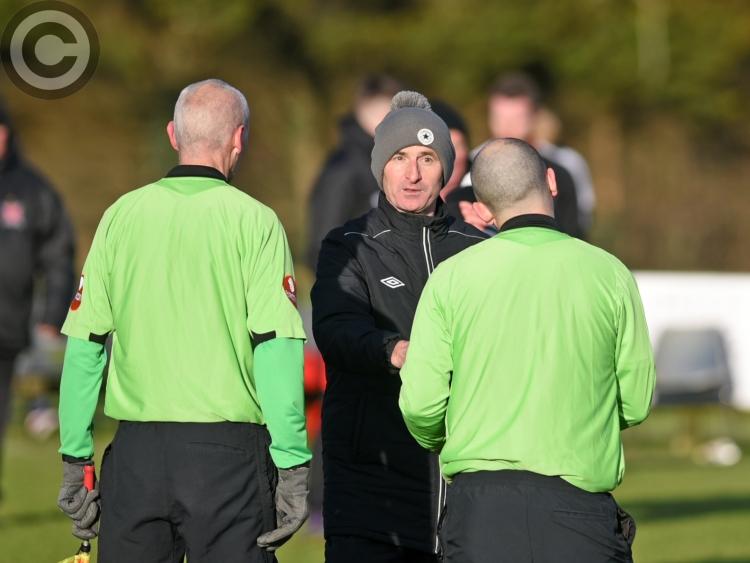 Preparing a team for a Tully Cup final was the last thing Colm McConville could have envisaged last autumn. A well-known Dundalk Schoolboys League referee, as far as he was concerned, his management career was in the past.

However, on Saturday, he will preside over Bellurgan United as they bid to claim their second Tully Cup victory in four seasons.

Victory would be a first for McConville, whose previous clubs include Woodview Celtic, Glenmuir United and this weekend’s opponents, Muirhevna Mor.

“They were looking for a manager and talking to Martin Finnegan, and Martin just asked would I be interested so I met with him and had a chat, and said that I’d give it a go because I’d been out of management for a while.

“My first game was against Muirhevna Mor in Bellurgan,” he quips. A 3-2 win dealt a further blow to the Blues’ hopes of retaining their title as the Flynn Park men boosted their survival prospects.

His brief when replacing Wayne Conroy as manager was clear: “The cup never even entered the thoughts. It was about keeping us in the division.”

In his seven months at the helm, Bellurgan maintained their top-flight status relatively comfortably, while going on a run under the radar to reach this stage for the fourth time in five seasons.

Yet, despite their recent experience of the Tully decider, McConville is adamant that all the pressure is on ‘the ‘Mor’.

“We can go into the game with nothing to lose. We’re serious underdogs because if you compare the two squads, there’s no comparison really. But, as I say to our boys, it’s a day out and they should go for it, and if that’s not good enough, it’s not good enough.

“You just don’t know in a cup final, though, because the pressure is going to be on Muirhevna Mor. Will it get to them, will it not? I don’t think it will because they have got some very good players.

“For some of our young fellas, they might never play in a cup final again, while the older fellas know the feeling of losing and I think that gets them geed up. They all seem to be keen. They played in the cup final last year and said that they didn’t perform and they know they let themselves down. They don’t want that to happen again.”

No matter the outcome of Saturday’s clash at Oriel Park, it’s surely been a campaign of dramatic twists and turns for McConville. And who’s to say that it hasn’t got the fairytale ending…