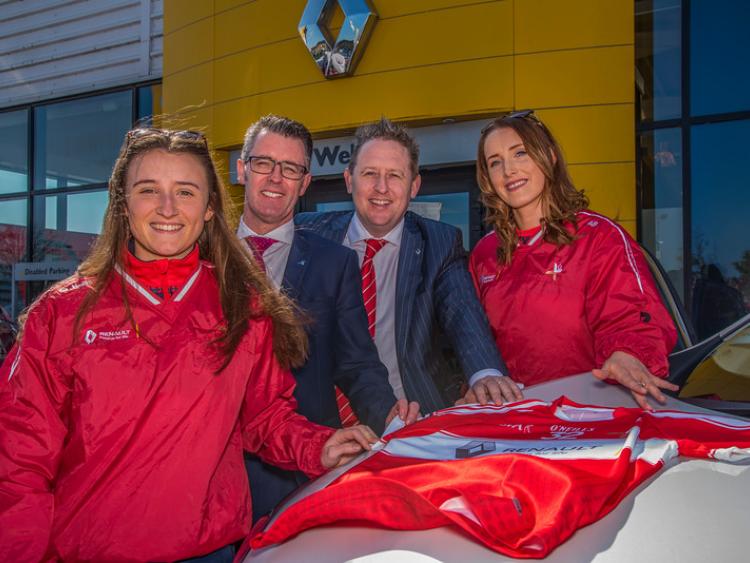 Louth Ladies LGFA have a new main sponsor – regional Renault and Dacia Franchise dealers, Blackstone Motors. The sponsorship kicked off on Saturday at Blackstone Motors, Drogheda, with the official launch and handover of the new kit.

Members from the Louth Ladies County Board and players from both Ladies Senior and Minor teams gathered at Blackstone Motors to present them with the new jersey to mark the start of the sponsorship, which features both the Renault Logo on the front, and the Blackstone ‘B’ on the sleeve.

LGFA chairperson Dermot Woods likened Louth Ladies with Blackstone, saying that both are ‘long established with a proud tradition’. He said that ladies’ Gaelic football is hugely popular in the county, with inter-county players displaying massive commitment to the ‘red jersey’.

‘Louth Ladies County Board are honoured and delighted to have Blackstone Motors as our main sponsor. We have no doubt that the financial support we will receive from Blackstone will benefit not only our county players but also the growth and development of football within the wee county,’ said Ann Meade, assistant treasurer and former chairperson Louth Ladies County Board.

This is the third Louth-based sponsorship for Blackstone Motors, who also sponsor Drogheda Town FC and Dundalk FC. This is the first time Blackstone have sponsored a female County Team, and it’s a proud moment for staff.

‘We are incredibly happy to sponsor Louth Ladies. Since opening in 2007 we have always worked to support or sponsor local teams whenever we can. We wish them the best of luck in their upcoming matches,’ said Donal Waters, director and co-owner of Blackstone Motors.

Louth Ladies won their second Junior All-Ireland Championship in 2015, 17 years after their last win in 1998, and also won the All-Ireland Intermediate Championship in 1999. This was a major success for Louth football after previously falling at the final hurdle in two previous attempts in 2010 and 2012. This win promoted Louth to the Intermediate level for 2016. 2017 looks bright for Louth with the success of Louth Ladies u16 in the All-Ireland B Final against Tipperary, and Louth Minors featuring in the Leinster final on 26 April.