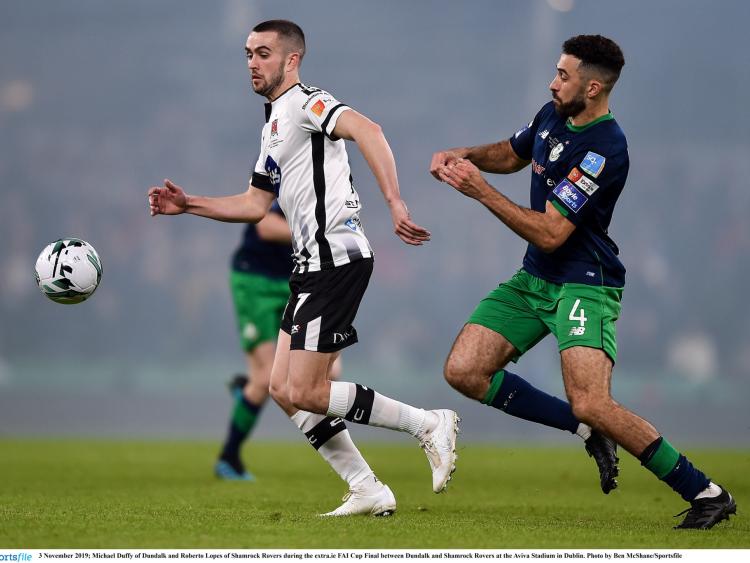 Sunday’s President’s Cup clash is a glorified friendly that will hold a keenly competitive edge.

Pardon the juxtaposition, but it seems that neither side really have anything to prove to the other, or, more importantly, to themselves, heading into the new season.

Given Dundalk FC’s star-studded record of the past decade, they will never have felt under pressure to achieve vindication in some form. There was the fleeting fall down the pecking order as Cork City took command, though generally it’s been about setting the early pace and comfortably maintaining it in domestic terms, as five Premier Division titles in six seasons would suggest.

Rovers, alternatively, are still the great pretenders in a variety of ways; well, this crew of Hoops anyway. They’ve so often flattered to deceive when it’s mattered most, yet the importance of November’s FAI Cup final victory, over The Lilywhites, cannot be underestimated.

In ending the club’s famous 32-year hoodoo in the competition, Stephen Bradley achieved his first trophy as manager of the Tallaght side and the fact that they managed this against the league champions, who have held the upper hand in their meetings since the Dubliner took charge of Rovers, will have added a suger cube or two to the mix.

The reality is that The Hoops will no longer feel any sense of inferiority, that is if their arrogance had ever allowed such a complex to manifest itself. They have now felt the pleasure of pipping Dundalk when it really mattered, that it was on penalties is of secondary importance.

Previous President’s Cup affairs held an underlying meaning. Last season’s was about Vinny Perth getting his reign underway in ideal fashion; 2018 was deflating from a Dundalk angle given Cork appeared primed to reassert their dominance over the season to follow, the champions coming from 2-0 down to win 4-2; the prior two years, where City were concerned anyway, was about garnering belief that they could actually beat The Lilywhites.

There is scope to suggest that Rovers need to win a game of substance at Oriel Park before their role at second fiddle is upgraded, though a President’s Cup victory would hardly fulfil the necessary criteria in that sense.

The teams are mature, Dundalk especially but Rovers particularly. Sunday’s visitors have a very settled panel and having improved their defence with the incomings of Liam Scales and Rhys Marshall, the sole missing jigsaw piece relates to the offensive department, in the form of a proven goalscorer.

That Dundalk have two natural finishers, Patrick Hoban and Georgie Kelly, could be a determining factor over the course of the campaign, and possibly even in the head-to-head clashes, which will surely go a long way to deciding the title’s destination, either directly or in the form of momentum.

Neither side will feel an overwhelming sense of pressure approaching this weekend’s match. The teams will be confident and likely playing down the meaning of the outcome. But victory over the other is always welcome and Dundalk have a November score to settle.