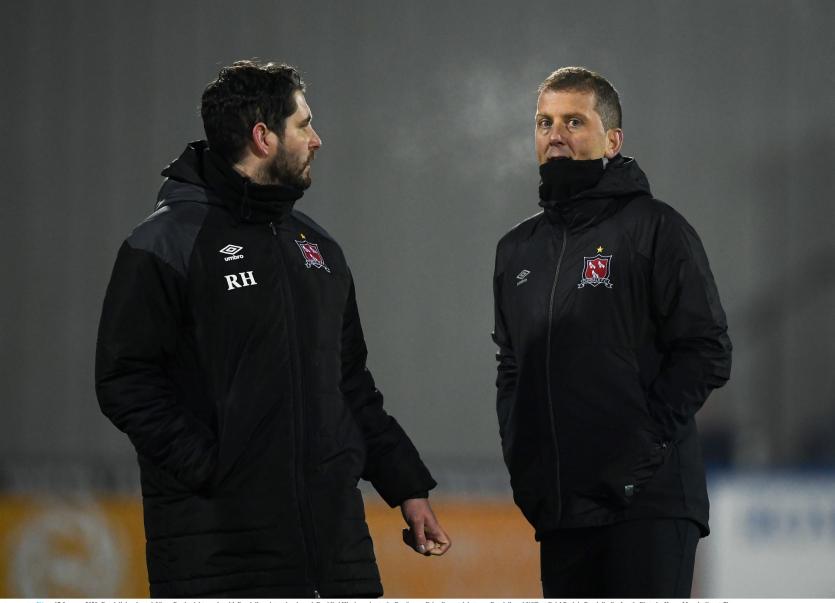 Vinny Perth has insisted that Dundalk FC’s sole focus lies firmly on the start of the SSE Airtricity League season against Derry City, as opposed to the upcoming President’s Cup showdown with Shamrock Rovers.

The annual curtain-raiser for the dawn of the new campaign pits the champions, installed as the bookmaker’s favourites to win the league, against The Hoops, who were the FAI Cup’s winners last year.

Rovers are being widely tipped to once again challenge Dundalk on all domestic fronts, but Perth suggests, in respect of the rest of the league, that it’s far too early to be making such assumptions.

“Everyone starts on zero points and that’s what I’ve said to the players. We’re not ahead of anyone, but, luckily, we’re not behind anyone yet, so we’re in a good place in that sense. We build towards the Derry game, that’s all that matters around here – the league is the key for us.”

The Lilywhites continued their preparations for the new season on Thursday night with a 2-0 win over Drogheda United at Oriel Park – a result which saw them presented with the Jim Malone Cup.

Three yellow cards were shown to Drogheda players by referee Paul McLaughlin as tempers flared in what wasn’t a typical pre-season friendly between the Louth rivals, but that didn’t at all surprise Perth.

“You’d expect that, no matter who you play against. I don’t think it was overly nasty. Both teams had a bit of a go tonight and a bit of local pride kicks in, but ultimately, we’ve come out the right side of it and, obviously, I think deservedly so.

“We created a huge amount of chances – not finishing them doesn’t concern me at this time of the year. This is time now, where the next week or two, we really focus on our style of play, our finishing, our creating chances ahead of the Derry game.

“We probably missed one of our ‘number tens’ tonight in (Will) Patching and (Patrick) McEleney, who weren’t able to play. We’ve protected them, so they would have given us a bit more creativity.

“We have to try things in pre-season, sometimes they work and sometimes they don’t. Tonight, we could have been a bit better, but I’m very happy where we are.”

Despite having just 21 senior players currently signed up, Dundalk’s manager is content with his squad, but didn’t exactly rule out the possibility of adding more players before the season kicks off.

“I’m really happy with the squad and we’ll see what happens,” continued Perth.

“We don’t tend to talk too much about what we’re going to do because we’ve been close to players for the last two months. I’m very happy with that squad, the fitness levels of us are huge.”