INSIDE TRACK | What a week: Two hurling epics, Louth GAA and a good result for Dundalk FC in Europe 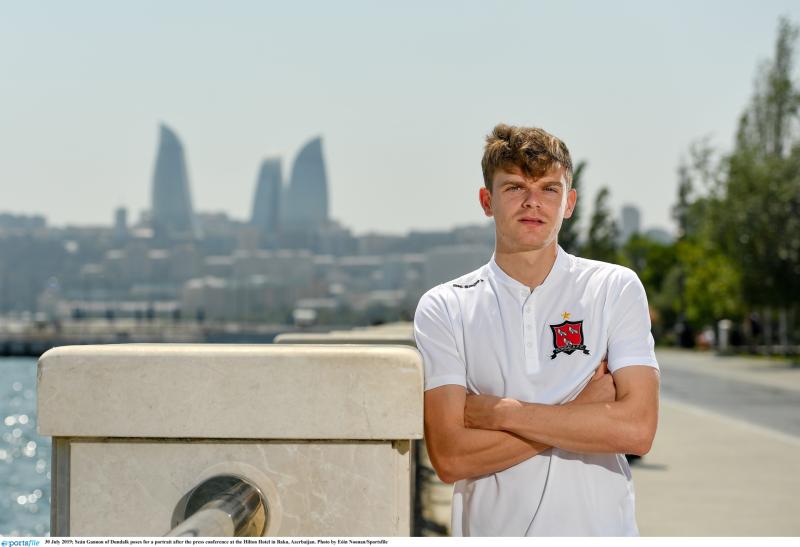 Dundalk FC's Seán Gannon poses for a photograph during today's press conference in Baku, ahead of the return leg of their UEFA Champions League qualifier against Qarabag. (Pic: Eóin Noonan/Sportsfile)

Some bits and pieces from the last week. No, make that chunks and even bigger chunks. Dundalk had another fine Euro result and the All-Ireland senior hurling championship produced two momentous semi-finals.

To Inside Track’s soccer eye – admittedly uneducated - Qarabag FK looked to be as good as any continental team to have played at Oriel Park. That, at least, is how it looked on telly. (Perhaps IT should scrap that word ‘looked’ – only opens the door to sarcasm.)

The Latvians were solid in defence, smart on the attack and all the time disciplined. Perhaps had they not gone into such an early lead, they might have been more adventurous. What we have we’ll hold, seemed to be their mantra after Emreli had found a way past Gary Rogers with a header.

That Dundalk rescued the match with a Pat Hoban goal 12 minutes from the end of regulation time, giving a real edge to this Wednesday evening’s second leg in Baku, can be attributed to persistence and a ‘throw the kitchen sink at them’ approach in the last quarter. And you know what? – it could, and perhaps should, have produced a win. Decent chances were passed up in the final phase.

Whenever Stephen Kenny’s name is nowadays mentioned it’s in relation to his role as the Republic of Ireland’s U21 manager, or as Mick McCarthy’s successor as senior team boss next year. If there was an Oriel hangover following his departure it has been well and truly cured – Vinny Perth, assisted by John Gill, is doing it his way and is right on top of his game. Keeping an eye on the domestic scene, the Dubliner guided his team to a win in Saturday night’s league tie with St. Patrick’s Athletic.

Talk about kitchen sinks: several of them have been thrown at Brian Cody (pictured) since he first became Kilkenny hurling team leader in November of 1998 and somehow he has managed to fend them off, just as he did whenever a sliotar came flying at him in his days as a county team full-back.

If there was to be a Leinster winner of this year’s All-Ireland, popular opinion was Wexford would be the ones to do it. Davy Fitzgerald’s team made a bold bid, winning the provincial crown – beating Kilkenny in the final – and on Sunday were valiant in their defeat by Tipperary in the All-Ireland semi-final. But it’s Cody’s team who are still in the hunt, and on Sunday fortnight, hurling’s greatest ever manager leads the black-and-ambers out on to Croke Park yet again.

Cody will be attempting to lift the Liam MacCarthy Cup for the 12th time, the first of his titles having come just two years after he’d taken over as manager. His side was engaged in an epic tie with champions, Limerick, on Saturday, and if the excitement, outstanding scoring and, yes, controversy, of that day wasn’t enough to satisfy, less than 24 hours later, Tipperary and Wexford served up another helping of much the same. Somehow, hurling seems to get better year on year.

O’Raghallaigh’s are the only surprise inclusion among the eight teams to go into the hat for Sunday night’s Louth championship quarter-final draw. The other Drogheda side, Newtown Blues, remain favourites and St. Patrick’s, most often winners of the title this century, have still got Paddy Keenan to give meaning to the oft-heard, class is permanent.