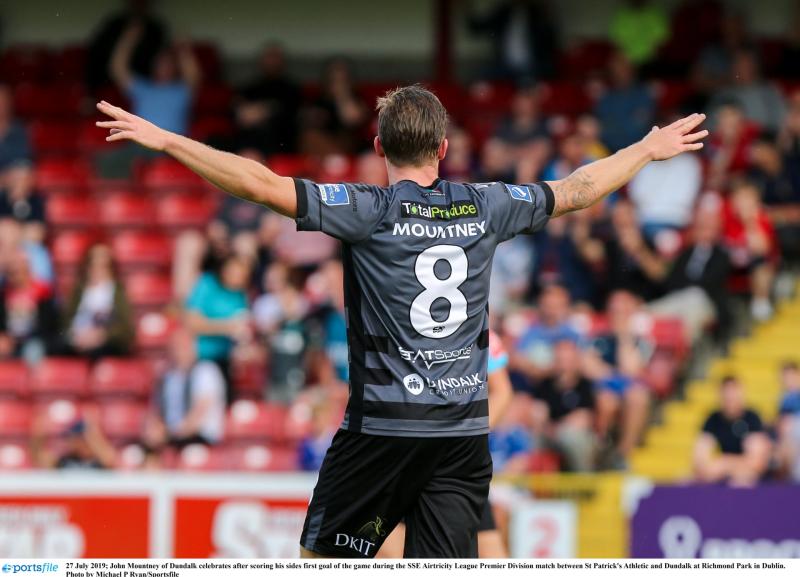 John Mountney, eight minutes into the second half, was the sole goalscorer as The Lilywhites prevailed fairly comfortably at a ground in which they lost earlier this season. St. Patrick's Athletic finishing with 10 men following Mikey Drennan's dismissal.

A victory, which extends Dundalk's lead over Shamrock Rovers back to eight points, always looked on the cards for Vinny Perth's team, who controlled a lively affair, despite making a raft of changes ahead of Wednesday night's Champions League qualifier against Qarabag in Baku.

Although chances were traded during an even first half, where The Lilywhites grew more dominant in the lead into half-time, albeit, without having a gilt-edged opportunity to hit the front - Patrick McEleney, from range, shooting their best effort of the half, which Brendan Clarke saved.

Georgie Kelly almost broke the deadlock on the resumption, with McEleney playing a part, and the Foylesider was at it again for the breakthrough, passing across goal for Mountney to finish left-footed to the net from past the penalty spot.

There was huffing and puffing in both boxes as full-time approached, Pat's throwing balls into the area, which Brian Gartland and Daniel Cleary dealt with comfortably, while Gary Rogers was dominant when required. Indeed, one of his interventions saw Pat's striker Drennan booked and then shown the line for consistent remonstrations at having a free awarded against him.

Over to Rovers tomorrow night.