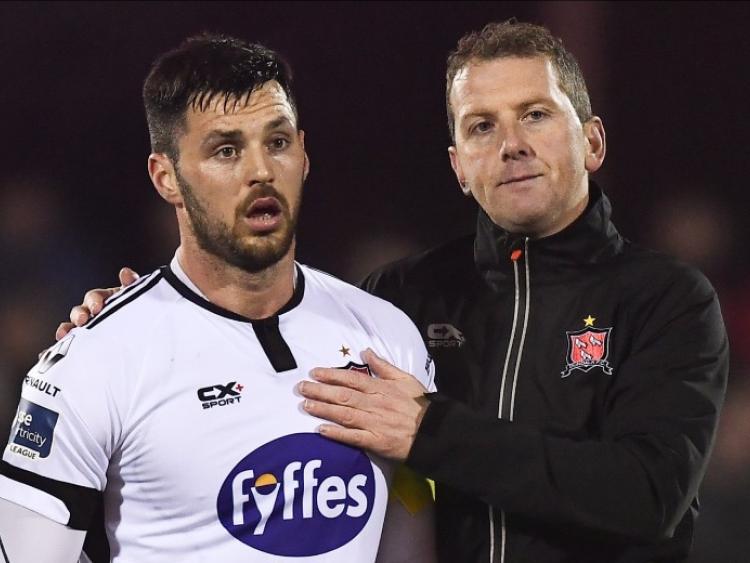 Vinny Perth has revealed the love-hate relationship that he enjoys with Patrick Hoban as he heaped praise on his striker, whose scoring exploits, he says, would have resulted in international recognition for others.

Perth’s faith in Hoban was shown in February when he named him as club vice-captain. The 27-year-old has so far been lacking the service he received last season when he netted 29 times in the league, with five of his six goals this term coming from the spot.

However, Perth believes the Galway man has displayed his leadership qualities. His skipper was ice-cool last week with a huge 95th-minute penalty against high-flying Bohemians, and his all-round contribution in the subsequent victory over Finn Harps was noted by hat-trick hero Daniel Kelly.

Meanwhile, the forward levelled Joey Donnelly’s record of 69 league goals for the club in Easter Monday’s win over UCD - a tally which has stood since February 1943.

Dundalk enter on a five-match winning streak at Oriel Park, which has brought confidence to the camp as they prepare to welcome leaders Shamrock Rovers this Friday (8pm, eir Sport).

“Pat has been a leader for us on and off the pitch,” Perth said. “He wears his heart on his sleeve and he’s not everyone’s cup of tea. There are days I hate him myself, but he knows that.

“At the same time, I’ve probably text Pat every three days for the last six years; even though he disappeared for three years, he was still always our player. He is someone I love the bones of and I hate him as well at times. He’s that type of lad!

“But he cares about this club. It hurts him as much if not more than anyone else in terms of when we don’t get good results. He is fast becoming a Dundalk legend with his goals – he’s got 81 goals in around 130 appearances, or close to those stats. That’s phenomenal. People have been capped for less. He’s a real leader for us at the moment and long may it continue.”

Dundalk have announced that there will be no further online ticket sales for Friday’s fixture. Tickets for the match are only available in person at Oriel during office hours.