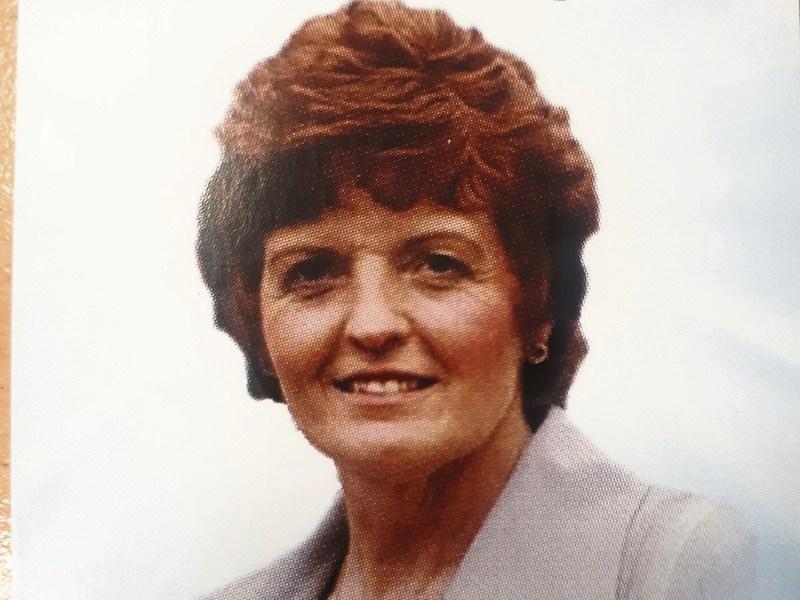 Aged 71, she passed away peacefully in the tender care of the staff and nurses of the Rehabilitation Unit of Louth County Hospital in the presence of her family.

Marie was born on 28 April 1947 in Drogheda, one of four children to Michael and Maria (née McArdle) Howard, the only girl in a family of four. She grew up in Pearse Park, before moving to St. Mary’s Road and later to Avondale. She was educated at the Friary National School and subsequently at both St Vincent’s and St. Louis Secondary Schools.

Having completed her education she commenced work in Dublin in the insurance industry, and later in Louth County Council, following in the footsteps of both her parents, where she worked in Rates, Motor Tax and Planning. It was when on a site visit on the Newry Road that Marie first met her future husband, Seamus Keelan, then a Councillor, and their relationship began. They were one of very few couples who married on 29 September 1979 - on the day that Pope John Paul II came to Drogheda. Their wedding was in Ravensdale Church and was performed by Seamus’ late uncle, Fr. John Keelan PP. They then set up home together on the Newry Road.

Marie left work in 1981 to raise her family. She returned to work in Co Louth VEC in 2001 and eventually retired in 2012. She had an engaging personality and a wide circle of friends and was very popular. She was a very loyal and caring person with a strong sense of social justice. Marie was a devoted family person. She always remembered birthdays and anniversaries.

Always a good singer, she joined the Netwell Choir after her retirement. She also resumed playing bridge on a weekly basis at the Crowne Plaza and she joined Good Morning Louth and enjoyed engaging with her clients over the phone and her colleagues in the organisation. A keen gardener, Marie loved her flowers, shrubs and hanging baskets and got great satisfaction from them. She enjoyed reading, particularly Maeve Binchy and Cathy Kelly, as well as broadsheets and enjoyed doing the daily crossword. Marie was a keen badminton player and also enjoyed watching tennis.

Marie was known to be the political person in the family providing much-needed advice, support and encouragement when required in Seamus and Conor’s political careers. She was something of a social worker herself arising from her own life and work experiences and would try and solve grievances for friends and acquaintances through her own knowledge of the political system and also encouraged many people to follow an ambition or dream.

Marie was never sick throughout her life and accordingly her cancer diagnosis in June 2017 was a considerable shock to both family and friends. She demonstrated remarkable courage and resolve in fighting the illness over a fourteen month period.

Large numbers called to her home and to the funeral itself to pay respect to her and to her family.

These included many from Louth County Council, Co Louth VEC, the Netwell Choir, Good Morning Louth, Bridge colleagues as well as many former neighbours and friends from Dundalk and elsewhere.

Having reposed at home, her remains were taken to St. Patrick's Cathedral for funeral mass which was celebrated by her cousin, Fr. Terence Howard SJ, assisted by another relative, Fr. Kevin Cooney SM.

The readings were given by her son Conor and Marie’s niece, Rachel Mooney while prayers of the faithful were led by her son Fergal and by Marie’s nieces and nephews Hilary Dickens, Michele Brown, Cameron Howard and Caoimhghín O Caoláin. Her nieces Deirdre McKevitt and Clara Howard presented the offertory gifts. Marie’s brother, Brendan, gave a moving reflection of her life. Music was provided throughout by Brendan McCourt and Catherine Shaw. One of Marie’s favourite musical pieces ‘Santa Lucia’ was performed as her remains left the Cathedral. Burial took place afterwards in St. Patrick's Cemetery, Dowdallshill.Marie was predeceased by her parents, Michael and Maria, and by her brothers-in-law, Donal Keelan and Sean F. Gallagher. She is survived by her husband, Seamus, sons, Conor and Fergal, brothers, Paddy, Michael and Brendan, sisters-in-law, Anna, Anne, Marguerite (all Howard), Maura Gallagher, Mairead and Ann Keelan, brothers-in-law, Kevin and Ronan Keelan, nephews, nieces, grand - nephews, grand - nieces, cousins and other relatives.

Marie will be sadly missed by all who knew her.

Her month’s mind Mass takes place at 11.30 a.m. in St. Patricks Cathedral on September 9 next.