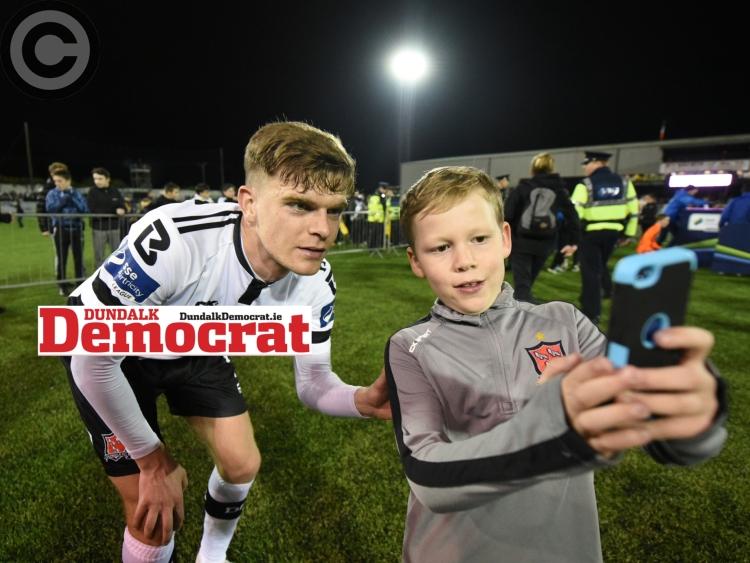 There were parallels between both the media and Sligo Rovers trying to get near Dundalk FC players on Friday night.

It was a deceptively difficult task. But, while the Bit O’Red were simply outclassed, those of us present in a professional capacity were caught up in the mass’ tidal wave; all supporters wanting to share in the glory and players only too willing to give their time.

On the Oriel Park stairwell, over an hour after the full-time whistle, one player said that he missed all the celebrations having accommodated every fan, both young and old. He was asked for his special ‘Champions 2018’ top, which the Lilywhites wore when lifting the title, by a supporter. He declined politely, saying that he had promised it to someone else. And, through to his word, the next time our paths crossed he was back in his match jersey.

Brian Gartland, Gary Rogers and Seán Gannon - now experienced title winners with Dundalk - were the last players to leave the field, obliging to every followers’ request.

Oriel is often criticised, and the club has taken its fair share of flak too regarding ticketing, etc. this season, but the setting was perfect on the night. After the presentation, barriers were removed and mingling took place. Some fans will only know the current success, but this ‘meet and greet’ ensured it will be perhaps the most remembered win. The faces of supporters as they got up close and personal with their heroes... dreams came true.

As one interview took place high in the main stand with your writer and Dundalk’s No. 11 supreme, Patrick McEleney, an orderly queue formed with markers and jerseys in hand.

Another interview, involving Live at Oriel (Gerry Malone) and Patrick Hoban, was similar.

“It’s a great football town, Dundalk. They love the players, the players are heroes in this town and it’s great to see that. They’ve played tremendously well all season and they deserve everything they get,” Stephen Kenny, who gave a public speech fit for Ted Talks after the presentation, clenched fists et al, said post-match.

Quite a bit has been said of the Dundalk players. Kenny has referred to them as “humble”, others as a soccer pantheon. But they truly are a unique bunch.

A photo shot up on Nigel Watters’ Twitter account in the middle of last week. It featured Nigel, his two kids - Evan (8) and Harry (1) - and Hoban halfway up the stairs of the Watters’ family home. ‘It must have been a birthday. Hoban’s a generous fella for giving his time up to go along,' was one’s instant thought. ‘Fair play.’

Thanks a million @PaHoban10 for calling out to meet the #tallanstownlilywhites . The kids loved meeting you and standing for every picture and signing autographs. C’mon the town @DundalkFC pic.twitter.com/tm7IxVp4C0

However, it was much more, as Hoban explained: “I went to Tallanstown, to an estate there, on Tuesday and I was overwhelmed with the reception I got. I couldn’t believe it, there was about 70 kids, 100 people altogether, just there for me to take pictures and sign autographs. I was overwhelmed and absolutely delighted, it kinds of opens your eyes as well at how much people actually love you and love what you do - it gives you a huge sense of achievement. I’m just buzzing.”

It followed Stephen O’Donnell organising of a ‘whip around’ among the Dundalk players at last Monday night’s friendly against Newry City in aid of the charity efforts for Ellen Treanor, who has been diagnosed with a life-threatening neuroblastoma disease.