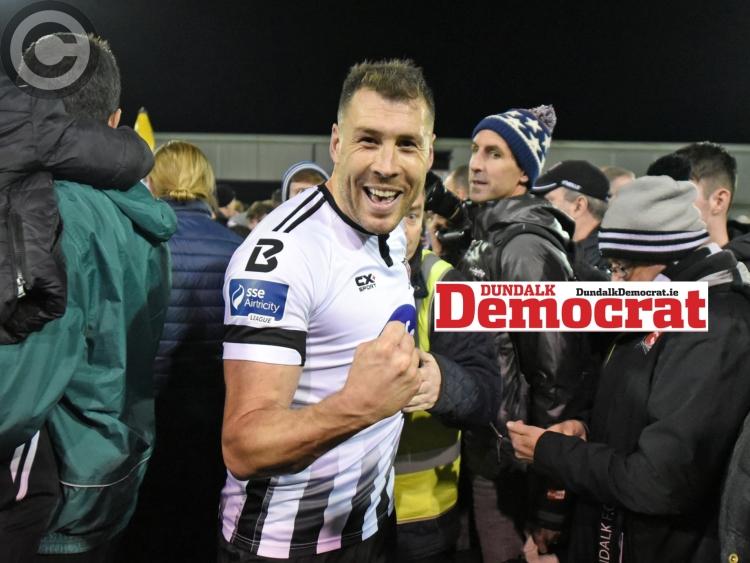 Dundalk FC marked their special night with a special display at Oriel Park on Friday night as they hammered hapless Sligo Rovers before lifting the league trophy.

In front of 3,877, Stephen Kenny’s men were scintillating, playing champagne football and pummelling the lowly visitors from the off, moving on to a record 86 points courtesy of their win.

It was box office viewing and Dundalk ensured there were plenty of ‘oohs’ and ‘ahhs’ throughout with a high tempo opening. Indeed, by the time the simmering atmosphere came off the boil - ever so slightly - the Lilywhites led and a whirlwind 15 minutes had passed.

John Mountney opened the scoring on nine minutes, dinking shrewdly over the busiest man in Oriel, Sligo ‘keeper Ed McGinty, after Ronan Murray had measured his lofted ball to perfection.

GOAL - Dundalk had already missed a penalty and had a goal disallowed for offside by time John Mountney gave the Lilywhites a 9th minute lead pic.twitter.com/3uMGvqbSyK

In truth, the score had been coming. Patrick Hoban - who finished the night with two goals - saw McGinty save his fourth minute penalty after the dancing feet of Patrick McEleney had been hacked down entering the area, before, just a minute later, Dundalk’s livewire, Michael Duffy, had a strike ruled out for offside with Hoban omnipresent in the build-up.

And so Mountney’s effort marked the end of a steadfast opening.

The Bit O’Red, in front of new manager Liam Buckley, managed to get a grip on the game as the opening period progressed, but then Duffy hit them with another sucker punch, teasing the frantically backtracking Kyle McFadden before arrowing the ball to the bottom corner of the net.

GOAL - A swift @DundalkFC attack and Michael Duffy puts the champions 2-0 up against @sligorovers pic.twitter.com/jW83TRQSej

A third arrived before the interval as Mountney brought up his brace, bravely beating the advancing McGinty in heading home Dean Jarvis’ delivery.

GOAL - @dundalkfc cruising at Oriel Park against @sligorovers as John Mountney gets his second on the night as we approach half-time pic.twitter.com/NibMI7k35I

The second period went like the first, with Dundalk in complete control. Hoban had a shot cleared off the line by McFadden before he atoned for his earlier miss by sending McGinty the wrong way from 12 yards, after Liam Kerrigan had clipped Seán Gannon.

GOAL – Second time lucky from the penalty spot tonight for Patrick Hoban as he makes it 4-0 to @dundalkfc pic.twitter.com/ammvfRK2Us

And the Galwegian subsequently diverted his second past McGinty to level Brendan Bradley’s 29 goal haul of 42 years ago. One more goal would see the Dundalk striker become the first Irish man to score 30 league goals in a season.