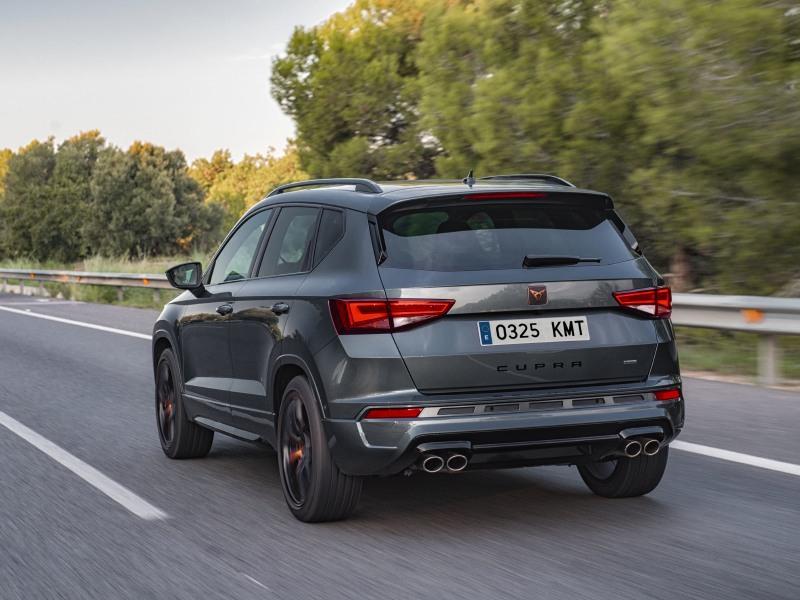 We all fell in love with hatchbacks. Once smitten we wanted more and along came the hot hatch. Our eyes wandered and we have new beaus, the crossover. And now, dahnah, we have the hot crossover in the form of the Cupra Ateca. Cupra, to avoid a long explanation, is the new sporty line-up from Seat.

It looks epic in the metal. 4 pipe, double flow exhaust at the back and bronze inlaid alloys at each corner. It deservedly drew a lot of attention when parked. The logo, for the casual observer, is a puzzle and whilst onlookers might cop it is an Ateca they are flummoxed by the Cupra badge. Let’s just say that it’ll be interesting to see how Cupra develops over the coming year or two and if they make a success of Cupra breaking the link from Seat.

So what is it? It’s a 2.0l, turbo-charged, petrol engined, 4WD, 300hp animal that’ll do 0-100 km/h in 5.2 seconds. For perspective, that’s half a second quicker than the Renault Trophy I tested a few weeks ago and this in a crossover shell. The crossover body provides extra space and that higher driving position and in Cupra format - a lot more oomph. It feels tight and taught in corners and camouflages its height in terms of driving dynamics consummately. It rides hard, not harshly. It can move very fast as expected but I felt it did not have the immediacy of response expected. In other hot versions of cars I’ve driven the power always felt repressed and at the slightest coaxing it became a beast. I felt the Ateca always needed to be coaxed to deliver its power.

The closest rival I can think of for the Cupra Ateca is the BMW X2 M35i that kicks off at €66,055 a €16k premium over the Cupra Ateca, so remarkably the Cupra Ateca has found a holy grail niche. Mine had €8,742 of extras as well (€3,089 of that for Brembo Performance Brakes) but failed to deliver expected items like auto-dipping headlights, adaptive cruise control or electric seats with the first two being very common nowadays.

For now, Cupra have stolen a march on the more likely provider, Volkswagen, who gave us the first GTi but I am positive there will be a hot version of the Tiguan and T-Cross soon.

The Cupra Ateca has started the hot-crossover ball rolling and done it in a very impressive way.