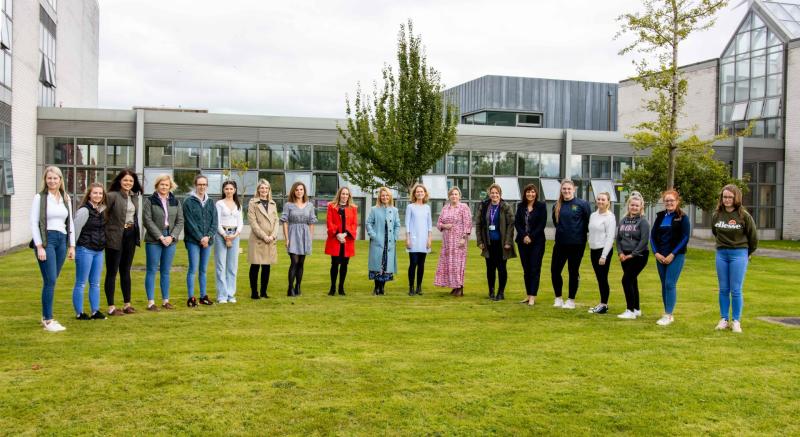 Female Agriculture students at DkIT with members of staff

Female students dominate the agriculture programme at the Dundalk institute in a traditionally male dominated industry.

DkIT entrants on the BSc (Hons) in Sustainable Agriculture/Agri-Food Production comprises of 60% female, 40% male which is phenomenal representation of females in a traditionally male dominated industry.

Head of Department of Agriculture, Food and Animal Health at DkIT Breda Brennan said: “It’s great to see the shift in gender balance that we have experienced over the past 10 years on our Agriculture programme.

"It indicates that perhaps in the future, women will have an even stronger role to play in the Irish Agriculture sector”.

The BSc (Hons) in Sustainable Agriculture/Agri-Food Production is a collaborative programme delivered jointly with Teagasc, Ballyhaise Agricultural College, Cavan and leads to a DkIT award at Level 8 on the National Framework of Qualifications.

The programme is very practical in nature, providing opportunities for students to develop their animal and crop husbandry skills, laboratory-based skills and a range of student-centred field trips and site visits, a DkIT spokesperson explained.

On completion of this course, students also meet the requirements of a qualified farmer for the purposes of all Revenue and Department of Agriculture (DAFM) schemes, traditionally known as a ‘Green Cert’ qualification.

The aim of this four-year Honours Degree course is to produce graduates with knowledge, skills and competencies to respond effectively to current and future developments in Agriculture and the Agri-Food Industry.

This is a common entry B.Sc. (Hons) in Agriculture programme, with students specialising in third year to graduate with either a BSc (Hons) in Sustainable Agriculture or Agri-Food Production.

The DkIT has also recently received the prestigious award for gender equality which was presented by the international Athena SWAN by AdvanceHE in recognition of its commitment to advancing gender equality in academia, and in promoting diversity and inclusion for staff and students in higher education.

Athena SWAN is Advance HE’s Gender Charter, and acknowledges the actions undertaken by Higher Education Institutions (HEIs) with relation to gender equality issues. The Athena SWAN Charter was first launched in Ireland in 2015 in a major national initiative supported by the Higher Education Authority (HEA).