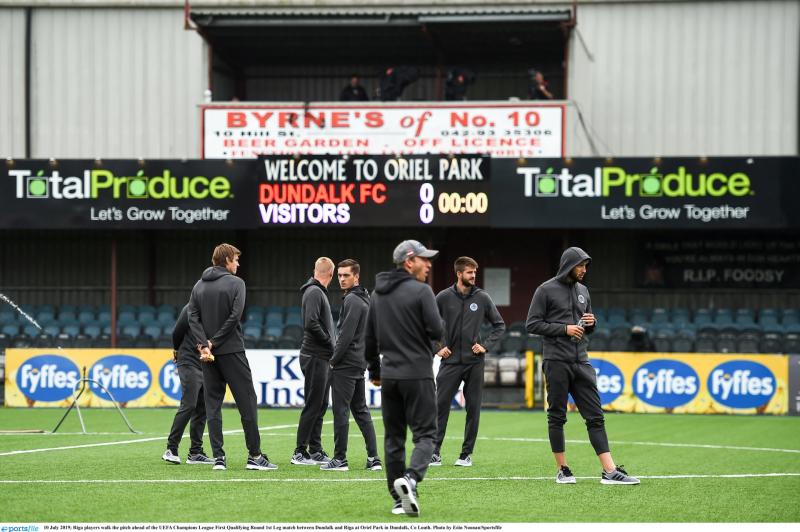 Either give Oriel a complete overhaul, bringing it up to the standards of, say, Tallaght, or go to a greenfield site. (Pic: Eóin Noonan/Sportsfile)

The boys on Dundalk FM were abandoned by Inside Track for last Wednesday night’s Euro match. Instead Dundalk’s qualifier with Riga FC was taken in on telly, courtesy of RTÉ.

The picture of Oriel was foreign to me, and not very pretty. No spectators behind either goals gave the place a desolate appearance, not what you would expect for a game of such importance. There were obviously restrictions in place, putting a limit on the size of the crowd and where it could congregate.

It’s like that at Drogheda’s Gaelic Grounds where Louth play their home games. Where once crowds of over 20,000 watched games there, now the most that’s allowed into the place is around 4,000. It will be better, however, for GAA fans when the new grounds off Dundalk’s inner relief road is up and running.

If they haven’t already done so, Dundalk FC should be thinking of following suit. Either give Oriel a complete overhaul, bringing it up to the standards of, say, Tallaght, or go to a greenfield site. What’s now in place doesn’t do justice to a club that’s taken four of the last five league titles - and is odds-on to add another – won numerous other competitions, and has the country’s best record in Europe, enhanced in recent years. The team, and those who follow it, deserve better.

My impressions on the game, for what they’re worth: Seán Hoare got the man-of-the-match, but for me it was the other Seán – Gannon – who better deserved it. The wing-full had the exciting Bopesu to take care of and did more than a decent job. He’ll need to be on his game again this Wednesday night for the second leg, because I could imagine that with the crowd behind him, Bopesu will try to add more to his repertoire of silken skills.