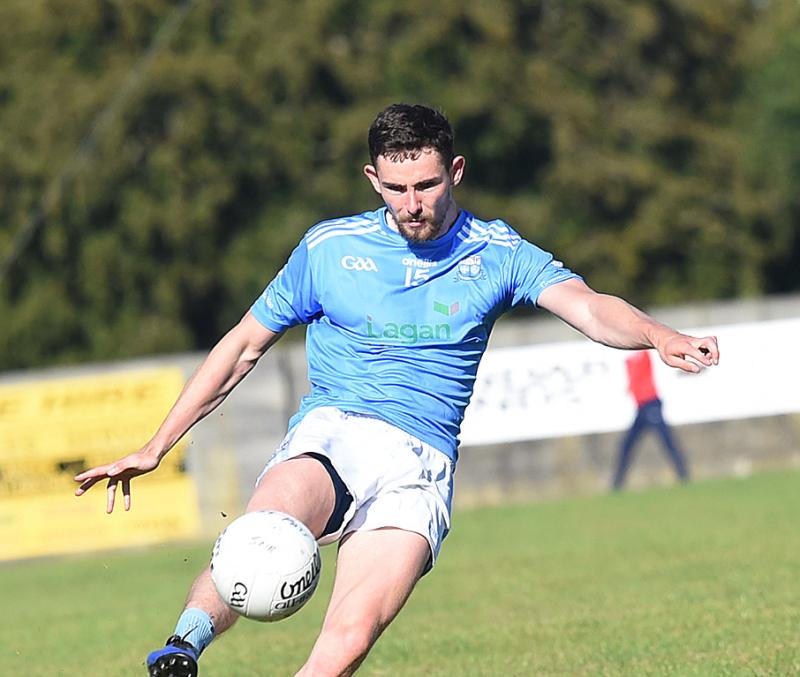 Ciaran Downey tries for a Newtown Blues score against St Patrick's during the group stages of the championship. (Pic: Arthur Kinahan)

The county’s most successful team will always have a say in the race for the Joe Ward Cup and this year will be no exception. Having won the Sheelan Cup, the Drogheda men had been at the top of Division 1 for vast majority of the year.

They were left in the group of death come championship, paired with last year’s finalists St Mochtas and a St Patrick’s team hungry to return to the knockout stages. First up was a date with the Louth Village men.

What greeted them was an extremely open contest, one which the Mochtas seemed to have control of in the first half. The Blues looked flat, maybe due to the longer break following the league, while a missed penalty from Emmet Carolan didn’t help. At the turn they trailed 1-8 to 0-5.

Des Lane’s side needed a quick reaction to reignite their challenge for the Joe Ward Cup and to their credit they looked a different team.

They put the Mochtas under much more pressure, particularly after kickouts, which left them struggling to make the headway they had made earlier. This took the Byrne duo, Ciaran and Declan, out of the game.

A keeper change forced by the dismissal of Jason Callan helped their cause further, as they ran out 2-15 to 1-14 winners. Ciaran Downey and John Kermode their main weapons.

SFC Preview: Geraldines need to up their game or face elimination

Having a win already under their belts may have changed how they approached their final round loss to St Pats. They knew a narrow loss was enough to go through and top the group. This was seen in their lack of urgency down the stretch.

They had plenty of time on the ball, but were relying on drawing fouls in their own half as a way of giving time to their forwards to get into space. Robert Carr and Colm Judge came off the bench and improved the attack, but it wasn’t enough as they lost 0-11 to 1-6, yet still topped the group.

That rewarded them a date with St Josephs, a side that is very hard to read having had an up and down league campaign along with a both a day to forget and one to remember in this year’s championship.

The men from Dromiskin had a very poor start in Division 2 which resulted in Colin Kelly being brought into the fold midway through the league. It was too late to make the top six, but they steadied the ship, staying towards the top of Division 2B.

Their opener to the championship couldn’t have been a harder assignment as they faced up to an in-form Ardee side. This was as one sided as you could get. From the moment Ryan Rooney fired in their first goal in the second minute, the outcome never looked in doubt. It ended 6-18 to 0-11.

Ben Collier was one of very few bright points for the Joes in a day to forget, as he did all he could to create some form of attacking threat.

Moving onto their clash with Dundalk Gaels, it seemed as though the two sides were evenly matched. It was level at the break, Gaels in the ascendancy and marginally shading it in open play.

However, Enda McKeown and Cian Smyth’s side showed grit and dragged themselves back into the game. Conal McCaul began to control things around the middle and Collier lashed home the first three pointer. The contest then fizzled out.

Alan Lynch, Conall Smyth and Evan McTeggart also grabbed goals in this emphatic win, as the Joes began to punish any mistakes, forcing turnovers and breaking at speed any time the Dundalk men attacked. In the end it finished 4-14 to 1-12.

This is a hard tie to read. The Joes have been hot and cold so far, while the Blues have yet to really set the world on fire, despite taking on top opposition. Should there be a shock in the Quarters, it could come here, but an on-song Blues may be too good for an improving St Josephs.