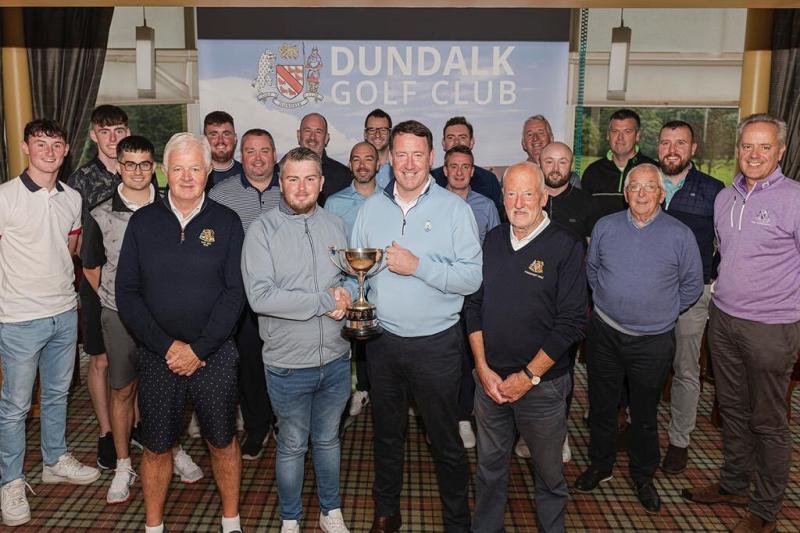 Caolan Rafferty hung on to win the Club Championship on the first Saturday in September when his one-under par 71 was just enough to edge out Neal Mackell by one shot.

The competition was reduced to 18 holes because of the inclement weather and MacKell almost pulled off a sensational victory after shooting five birdies on his way to a level par 72.

Rafferty had opened with three straight pars before carding a double bogey six at the fourth. He got a shot back with a birdie at the sixth, but he still turned in one-over.

MacKell found himself three over after three following a bogey at the first and a double bogey at the third, but he birdied the sixth, seventh and ninth to turn level, one shot ahead of Rafferty.

He was three behind Eoin Murphy, who had four successive birdies from the fourth followed by a bogey at the eighth.

Rafferty birdied the 11th to get back to level par but birdies at the 10th and 13th saw MacKell move to two under with five to play, two shots behind Murphy who had birdied the 12th and bogeyed the 13th.

As the weather worsened Murphy dropped six shots over the final five holes but MacKell hung in and although he bogeyed at the 15th, he was still one ahead of Rafferty playing the final hole.

The Club Championship was ultimately decided on the last when Rafferty birdied and MacKell bogeyed leading to a two-shot swing in favour of the Irish international.

The former Walker Cup player finished on two over par for third place, with Conor Curran shooting further back in fourth. Curran, a one handicapper, took the prize for best nett.

Derek Mulligan (26) won last Wednesday’s Deluxe Bathrooms Singles Stableford with 41pts. The Cloverhill player had nine three-point holes which helped him to victory on countback from the evergreen Harry O’Hanrahan (29) and Mark Tumilty (29) of Mayobridge.

There was a great turnout for the Jim Rowland Memorial Fundraiser in aid of South Down Palliative Care which was organised by Eve, Anna and Katie Rowland in memory of their father who died in April.

A full timesheet of 64 teams took part and in excess of €7,000 had been raised. The winners of the nine-hole fourball competition were Liam and Theresa O’Mahony with an excellent score of 26pts.

Margaret McCourt was the leading scorer in the 18 Hole Stableford played on Saturday September 3 and Tuesday September 6.

Playing off 33, Margaret shot 22 points on the front nine, and bettered that on the back nine, with a super 23 points.

Margaret claimed the Division Three top spot, four points clear of her nearest rival. Olivia Cunningham and Briege Renaghan were the other winners in Divisions One and Two respectively.

There was a large turnout in the clubhouse for the presentation of beautiful prizes, sponsored by Ultan and Deborah Herr. Many thanks to the sponsors for their very generous support.

Geraldine Mohan recently competed in the PGA Tankard Regional Final in Royal Tara. Playing with Club Professional, Leslie Walker and the winner of the men’s competition, Geraldine carded a superb 40 points to win the ladies competition.

Geraldine will now progress to the national final in the K Club on October 17. Very well done to Geraldine and best wishes for the final.