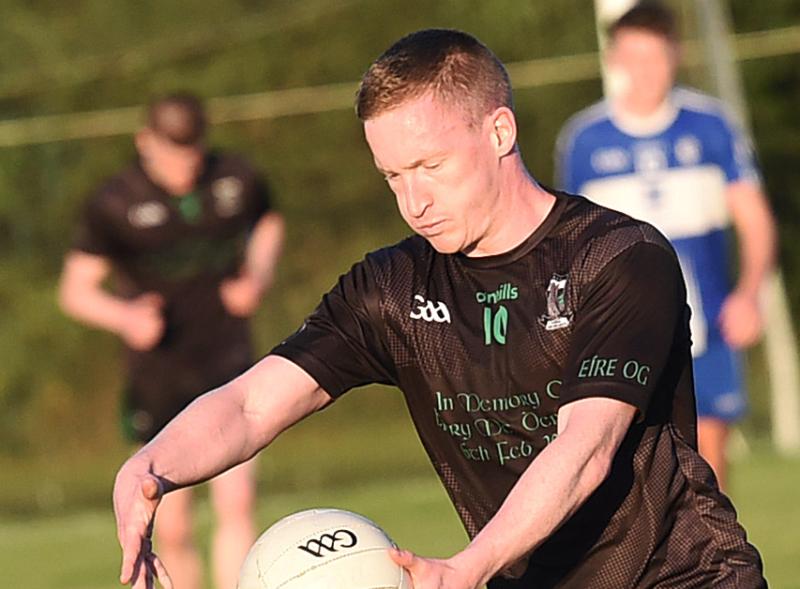 Cathal Ferriter was the chief scorer as Dundalk Young Ireland’s accounted for Kilkerley Emmets in a heated encounter under the lights in Darver.

After trading early goals via Jordan O’Donoghue and Tadgh McEneaney, The Irelanders led for much of the contest. Always keeping that little bit ahead, Adrian O’Donoghue’s troops did enough to book their place in the Quarter finals.

That is despite two late dismissals for Jamie Brown and Derek Maguire. They were six-clear at this stage and Kilkerley never really looked capable of making the one-man advantage count, one being because Shaun McElroy was sent to the line early in the first half.

Having missed the worst of the day’s conditions, this tie was played much more open, the first quarter a real end to end encounter, with big hits going in from the word go.

The men from Dundalk set up similar to a week earlier when falling to defeat to Hunterstown Rovers at the same venue. They looked confident as they patiently passed the ball around with ease.

Meanwhile Dessie Lennon’s charges favoured a fast approach with Tadgh McEneaney centre to all their attacks. They moved the ball quickly and directly as they looked to break down a dogged Irelanders defence.

The respective tactics were seen in the two sides first scores on two minutes, a lovely solo run from Peter McStravick the highlight in a great team move which teed up Cathal Ferriter. From the resulting kick out the Emmets moved the ball fast, allowing McEneaney to grab his first of the day.

The Irelanders opened up the first significant gap as they hit 1-1 without reply from Jordan O’Donoghue. After a lovely point from play, they duly won possession from the kick-out. Ruairi Kelly launched one towards the square and O’Donoghue rose highest to fist it home past Rian Hand.

This lead lasted just five minutes, as the men in yellow and blue hit back with 1-1 of their own. First up was a 45 from McEneaney, who followed this up with a goal of his own. In almost identical fashion to the first goal, the former county man fisted it into the net despite pressure from defenders.

Following this effort, McElroy would be yellow carded. This proved a costly booking as midway through the half he was sent to the line when a high challenge on Ferriter saw him earn a second yellow.

They would not score for almost 30 minutes from here, their opponents putting them under pressure. Two more scores from McStravick leaving his team 1-4 to 1-2 in front at the break.

In the second half, Kilkerley were forced to slow their game down, doing all they could to keep the Irelanders off the ball. However, all they could do was match them score for score.

After missing two frees in a row, Conor Quigley was put on place-kicking duties and looked lethal as he blasted over his side’s next three scores. Dean Maguire (2) and Ferriter returned the favour to keep the gap at three.

As the game entered its final quarter, the Dundalk men upped the pressure again as they looked to kill the game off. Three in a row followed from Ferriter, all from play, as he continued to get himself free or get his shot off despite plenty of pressure from Kilkerley.

It could have been even more of a cushion at this stage, with four attempts at the posts, from McStravick and O’Donoghue as well and Derek and Dean Maguire, going wide and keeping it from being all over.

This is where the Irelanders needed to show composure, as they looked to ease themselves over the line. Much to the dismay of their management on the sidelines, two Irelanders were sent off late in the half, Jamie Brown for a second yellow, Derek Maguire a straight red for an off the ball clash.

They still held a five-point lead at this stage and despite the setback they were able to hold on quite easily. However, they will need to improve their discipline and shooting if they are to cause a shock in the next round.