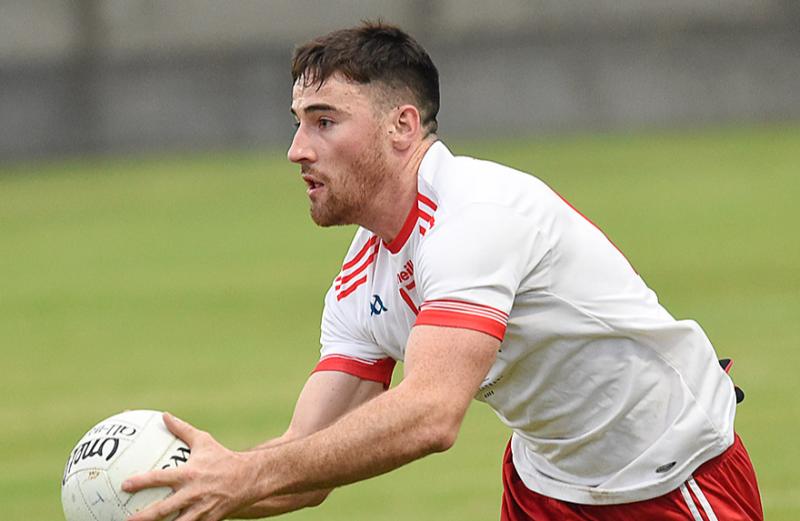 John Mitchels' Gareth Kane in action against Dowdallshill. He grabbed 1-1 as they comfortably accounted for the men from Dundalk. (Pic: Arthur Kinahan)

In form John Mitchels knew what they had to do to top their group and unfortunately for Dowdallshill the Ballybailie men did not relent until they got their homework done.

With Glyde’s win over Na Piarsaigh Blackrock, to top the group the Mitchels needed a healthier score difference than their Tallanstown rivals.

The ten point half time lead was never going to be enough as Glyde beat the Hill’ by 19 points last weekend.

However, like a Cricket team chasing a run tally, Mitchels made certain of top spot in a devastating second half performance with a whopping 4-10. That left Noel Tuite’s side with a plus 36 of a score difference, more than enough.

A first half goal from Cathal Corrigan and some fine scores from the red-hot John Gallagher among others opened up an 1-8 to 0-1 half time score.

Further goals came from Jake Gillespie, Gareth Kane and a brace from the aforementioned Gallagher, the pick of which was when he turned his man out on the sideline 50 yards from goal and powered through with pace and strength and buried the ball into the net.

In their last outing of the season Niall McManus, Justin Halley, Noel Finnegan and Daniel Mulligan all found the target in the loss for the Dowdallers. Last year's finalists Mitchels march on with a newly found vein of good form and perhaps at the right time.