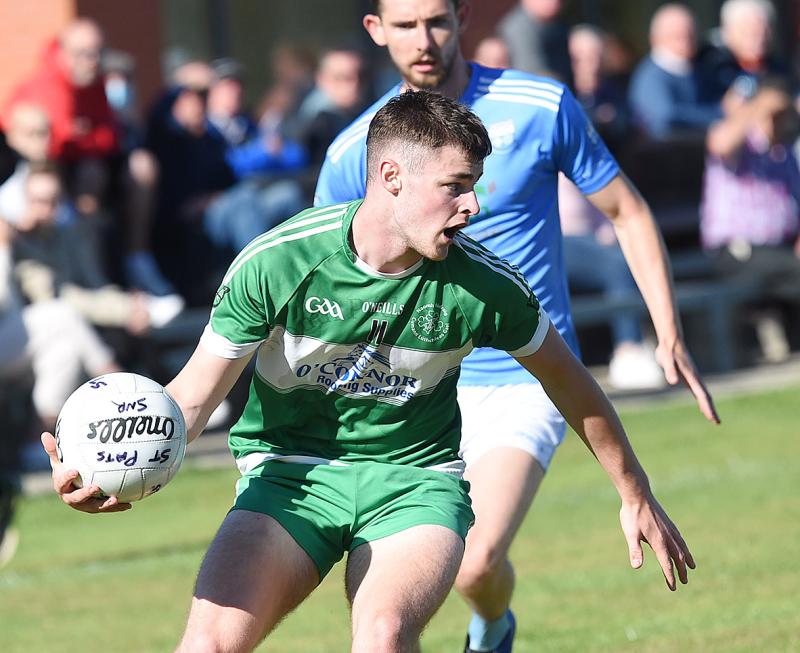 St Patricks Joe Connor notched four points from play as his side advanced to the knockout stages with a victory over the Blues. (Pic: Arthur Kinahan)

Patrick Flaherty at the Grove Castlebellingham

St Patricks may have been defeated two years running by St Mochtas at the group stages, but they had the last laugh this year, as their two-point win over a fancied Newtown Blues at the Grove sees them advance at the expense of last year’s county finalists.

Group 2 was always going to see a top side exiting the championship and with all three teams finishing with a win to their name, Mochtas beating Pats and the Blues defeating the Mochtas in rounds 1 and 2, it came down to scoring difference.

That factor may have reflected how the Blues approached the final few moments of the contest. Trailing by two, the Drogheda men focused on keeping possession at the expense of going for scores, as the final deficit of two points still sees them make the quarters as group winners.

However that shouldn’t be what this tie is remembered for as the Lordship club were deserving winners; showing a greater hunger, commitment, work rate and desire to win. Not to mention being by far the more clinical team.

Pats were five points to the good at half time, having kept a usually high scoring Blues to just two points, both from frees. A Robert Carr goal gave them hope of a comeback, but they never got back on level terms as St Pats showed their Joe Ward Cup credentials. 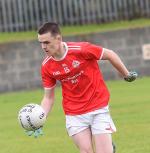 The Blues started the tie in the ascendency, but it didn’t last long, two early misses being all that came from a decent amount of time on the ball in the first 10 minutes. From here Johnny Magee’s side took control of proceedings.

Joe Connor and Cathal Grogan bagged a rapid-fire brace, Grogan befitting from a kickout turnover won courtesy of Ciaran Murphy on 13 minutes. He was a constant menace for St Pats, the extra pressure from him and others smothering their opponents and forcing mistakes.

Ciaran Downey fired back with his side’s first of the afternoon, only to go to 17 minutes before raising another white flag.

Pats were moving the ball impressively, Murphy, Joe Connor and Cathal Grogan the architects of the Blues destruction. Their work rate off the ball, ability to win possession via aggressive tackling, along with both picking out and playing the target man when required, was immense and kept defenders guessing.

Connor, Grogan and Aidan McCann (2) all hit over the black spot to build up a nice tally, before another free from Downey finally gave their fans something to cheer.

The Blues had plenty of time on the ball but were relying on drawing fouls in their own half as a way of giving time to their forwards to get into space. They managed to draw eight of these in the first half alone, but also notched up five wides, caused by that extra pressure and poor place kicking.

By the half time whistle the Lordship men led by 0-7 to 0-2, which was a nice cushion to defend when returning to the field.

You would have expected the competition’s most successful side to come out with urgency. They trailed to the Mochtas last week at the break and found another gear to turn a six-point deficit into a four-point victory.

However, there was never any real hint of another gear from them in this fixture as a lack of intensity, particularly when on the ball, was very evident to those in attendance. The fact they had one foot already in the Quarters, maybe they just never had the hunger to take on a Pats team bursting with hunger.

Joe Connor was the Pats’ main threat at this stage, his pacey runs proving impossible to deal with and he ended the half with three great scores from play.

The Blues got a lifeline on 43 minutes, Conor Moore fisted a long-range pass over the heads of the Pats defenders and into the path of Jamie Kelly. He duly teed it up for substitute Robert Carr who fired home from close range. It was now 1-4 to 0-9.

They did get the gap back to a point at one stage, but had next to no chances to get the equaliser, while an Alan O’Connor effort in injury time rubber stamped the victory.

It left the Pats as second seeds, the Blues topping the group on scoring difference, while the men from Louth Village were out of the championship and flirting with relegation.