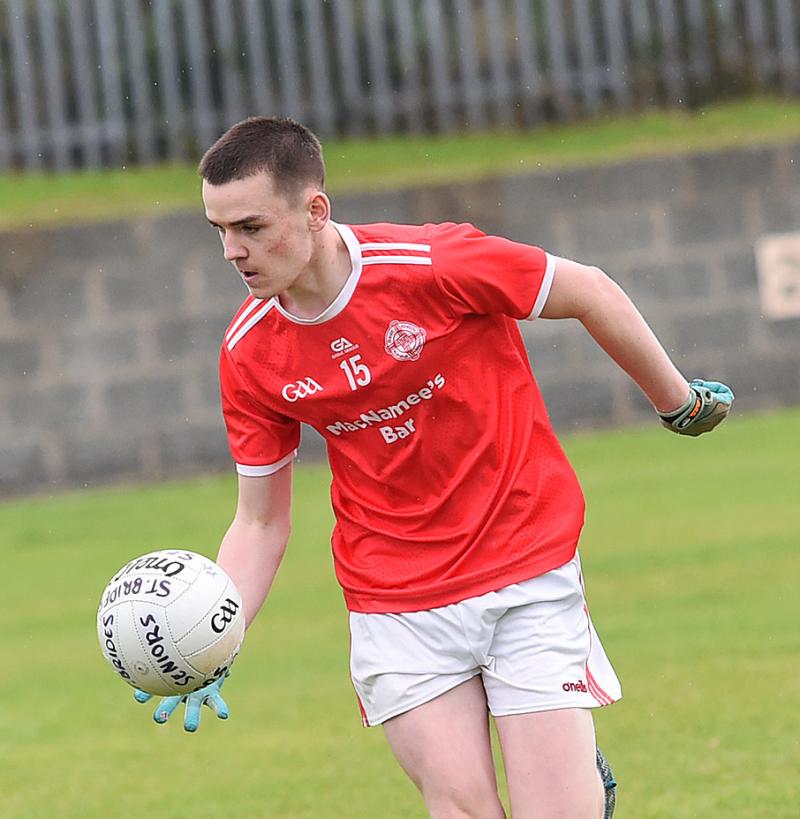 St Brides booked their place in the Quarter finals of the Senior Championship, two injury time points seeing them narrowly come out on top in this winner takes all clash with Mattock Rangers in Pairc Mhuire Ardee.

A Liam Flynn goal just before half time put the Collon men in front and they stayed ahead as the clocked ticked close to 60. This is despite playing much of the second half with 14 men after substitute James Caraher was red carded.

However, despite some poor shooting throughout, when it mattered the Knockbridge men had Kieran McCardle to rely on and his late brace got them over the line, much to the frustrations of Mattock Rangers, who trade the Quarter Finals last year for a relegation battle in 2022.

Unlike what we would be eventually served up, the tie began in rip roaring fashion with three points in the first five minutes. McCardle got the first of his impressive final tally of 1-7 inside the opening 60 seconds, while in return Cathal Fleming and Ronan Kilbride pointed for Rangers.

From here St Brides hit a mini purple patch, holding onto possession nicely, keeping the Collon outfit to just one attempt on the posts for the next 10 minutes. Mattock grew frustrated by how easy their opponents kept the ball and this led to poor tackles.

They conceded eight frees in their own half during the first 30 minutes alone, finishing the game with 15 fouls in this region of the pitch. On top of that were a further nine in the Brides’ half of the field.

An inform free-taker and this could have been curtains, but place kicking became a tough skill for St Brides, with Sean Marry missing three and dropping another couple short. Yet such was the number of chances conceded by Mattock, Declan McCoy’s troops were still able to go 0-4 to 0-1 in front.

McCardle bagged a superb effort for midfield and reacted quickest to a free that went short, blasting it over from close range with the goals at his mercy. The fourth score coming the way of Liam Molloy.

While freetaking was an issue for Marry, the same cannot be said for Cathal Fleming, No matter the angle in Ardee, he seemed capable of launching it over the blackspot. He ended their 18-minute barren spell without a score by raising a white flag on 23 minutes.

The tie turned on its head just before the half hour mark when Rangers struck the net. After two attempts went short, they got a break upon it happening a third time. A long-range ball from Ben McKenna was fisted into the net by Liam Flynn.

Coupled with two more points from Flynn and Fleming, Wayne McKeever’s men went into the dressing rooms with a surprising three-point lead, 1-5 to 0-5.

As stated already, discipline was an issue Mattock faced throughout this contest. It finally came back to haunt them when James Carraher was sent off by referee Derek Ryan for a stamp on a Brides player on 36 minutes.

The feisty nature never left the game with both Sean Marry and Alan Carraher black carded late in the half. The cards were inevitable given the big hits throughout the tie.

Mattock did remain ahead courtesy of two nice scores from Brendan Leacy and McKenna, but chances were drying up for the men from Collon. In the final 20 minutes they were outgunned 1-4 to 0-1.

The Knockbridge goal came on 42 minutes, a Stephen Hoey solo run, which started in his own half, helping to set up man of the match McCardle, the young attacker taking no prisoners as he blasted it home past Stephen Smith. That left a point in it, 1-7 to 1-6.

The ever-reliable Fleming bagged his fourth of the afternoon with four minutes of normal time remaining, but it was to be their last meaningful descent on the posts. McCardle grabbed the ties last three scores, two in injury time, to book their spot in the Quarter Finals.