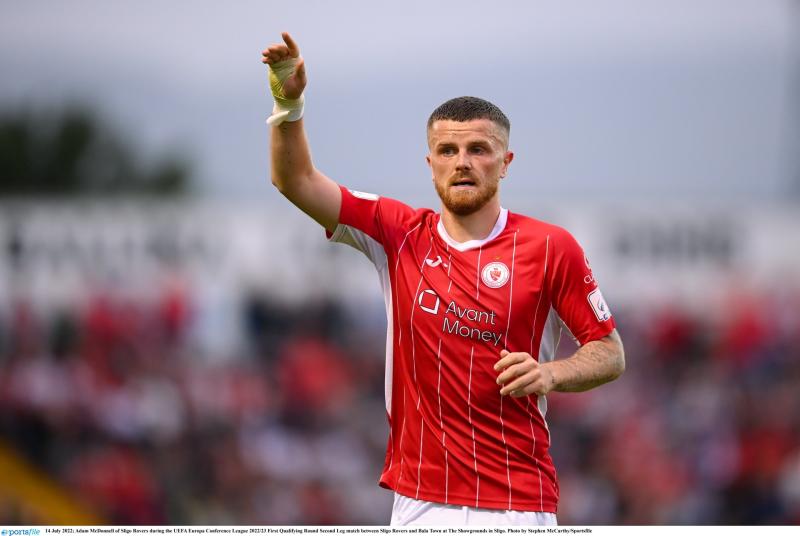 Adam McDonnell of Sligo Rovers played against Dundalk last week, but the player may have been suspended and still played in the fixture. (Pic: Sportsfile)

The FAI looks set to investigate the use of an illegal player by Sligo Rovers in their recent 2-0 win over the Dundalk.

Adam McDonnell is the player in question and having featured for the Bit O Red at the Showgrounds last Monday night, it is now being reported the Dubliner should have been suspended for that game.

"The Disciplinary Control Unit of the Football Association of Ireland has charged Sligo Rovers FC with fielding a suspended player in their SSE Airtricity Premier Division game on Monday, August 29th" confirmed the FAI in statement released Monday evening.

"The charge will be heard by the independent Disciplinary Committee of the Football Association of Ireland this week and the decision will be communicated to Sligo Rovers FC."

As was to be expected, The West Of Ireland club club has not taken the news lightly, commenting on the charges via their social media pages. They confirmed the incident surrounds McDonnell, along with the possible sanctions should they be found guilty.

"Sligo Rovers wish to inform supporters and sponsors of a notice received this afternoon to appear before the FAI disciplinary control unit (DCU) later this week.

"The charge arises out of Adam McDonnells appearance against Dundalk recently when allegedly suspended. The potential sanction in the event of an adverse finding is an overturning of the result.

"The club received contradictory communications from the FAI on Adam's possible suspension. Legal advice has been taken and the club will be represented at the FAI hearing. A further update will be issued later in the week."

Should the Lilywhites be awarded the three points, it would alleviate some of their current league woes, leaving Dundalk on 53 points, back into second place ahead of Derry City.