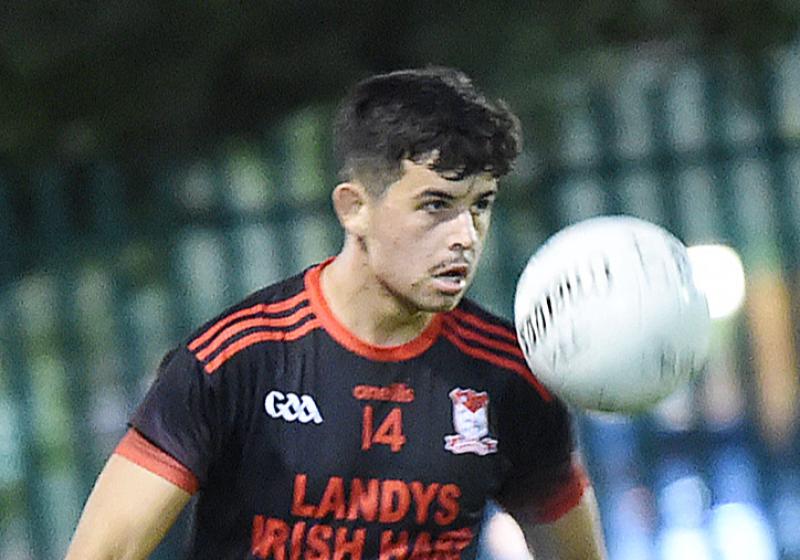 John Mitchel's John Gallagher grabbed three points as his side began the Junior Championship with a draw. (Pic: Arthur Kinahan)

Jake Gillespie showed nerves of steel to tap over a vital equaliser as John Mitchels recorded a well-deserved draw against a stubborn Glyde Rangers.

The men from Ballybailie were in front for the majority of the contest, but somehow found themselves behind late on after the Tallenstown club hit five of the last seven scores. But they were fully deserving of the draw. Given Rangers struggles in front of goal, they would’ve hoped for more.

The Mitchels got the scoring underway on seven minutes, courtesy of a John Gallagher free. This was followed by three more in the first quarter, two from Kevin Gallagher and another via John who was the go-to man in the forward line. Michael Quinn impressed with some nice link up play.

Fiachra Sheridan ended his side’s drought with a lovely effort from play, but this was followed by four misses in a row. This was a sign of things to come, Glyde finished with 10 wides alongside dropping three more efforts short.

The second quarter was a little more even, the teams trading efforts, leaving the Mitchels up by two at the break, 0-7 to 0-5.

Glyde started the half strong, they dominated possession and kept their opponents boxed into their own half via a series of turnovers around the middle. The problem was they couldn’t covert that possession into scores.

Three in a row midway through the first half via Ciaran Sheridan (2) and Niall Sharkey brought the game level for the first time since the Mitchels hit the front, before a late score from range from the boot of Sheridan put them ahead for the first time.

However on 59 minutes Gillespie hit the target to level proceedings. John Gallagher dropped an effort short deep into injury time, meaning the side’s shared the spoils.

Next up for the Mitchels is a rematch of last year's semi-final when they meet Na Piarsaigh, while Glyde take on Dowdallshill.