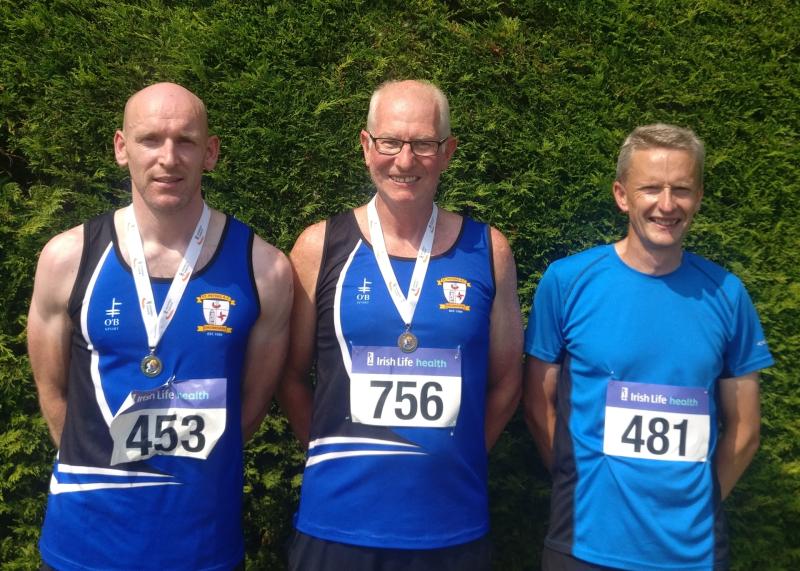 Eamonn McAuley, Thomas McGrane and Dermot Plunkett, the trio that competed for St Peter's AC at the recent National Masters Championships in Tullamore

There were some excellent performances by St Peter’s AC athletes at both the National Masters Championships and at the National Athletics League, both held in Tullamore.

Eamonn McAuley, up to now better known for his exploits as an inter-county Gaelic footballer for Louth, had a great win in the M35 200m, clocking a very fast 25.04 seconds. Earlier in the day he had just missed out on a medal in the M35 100m, in which he registered a time of 12.48 seconds to finish 4th.

Thomas McGrane, a regular competitor – and indeed medallist – in the National Masters’ Championships over the years, was also in the medals, as he took bronze in the M55 shot putt with a throw of 9.15m.

Dermot Plunkett, a former Louth inter-county hurler, made a return trip to his native town of Tullamore, and acquitted himself well in the M50 100m and 200m, finishing 6th in both events.

McGrane was back in action at the County Offaly venue on Sunday, when he made a strong contribution to the performance of the Louth men’s team in the National League.

The veteran athlete, whose first appearance in a National League Final was back in 1982, finished 4th in both the weight for distance and the hammer throw, recording a personal best of 3.74M in the former and a season’s best of 17.11M in the latter.

The two other St Peter’s AC athletes on the Louth team also impressed, with both recording personal bests. Rory McLoughlin finished 5th in the 1500m in a time of 4:10.66, while Seán Reilly came home 8th in the 400m, stopping the clock at 53.64 seconds.

In the final event of the day both these young athletes, who would generally be regarded as 800m specialists, lined out for the Louth 4x400m relay team which crossed the line in 7th place in a time of 3:42.50.

Reilly ran the difficult lead-off leg from lane eight, while McLoughlin brought the team home on the anchor leg. Their teammates on the second and third legs were Matthew Fitzpatrick from Dunleer AC and Cheta Obiefuna from Dundealgan AC respectively.