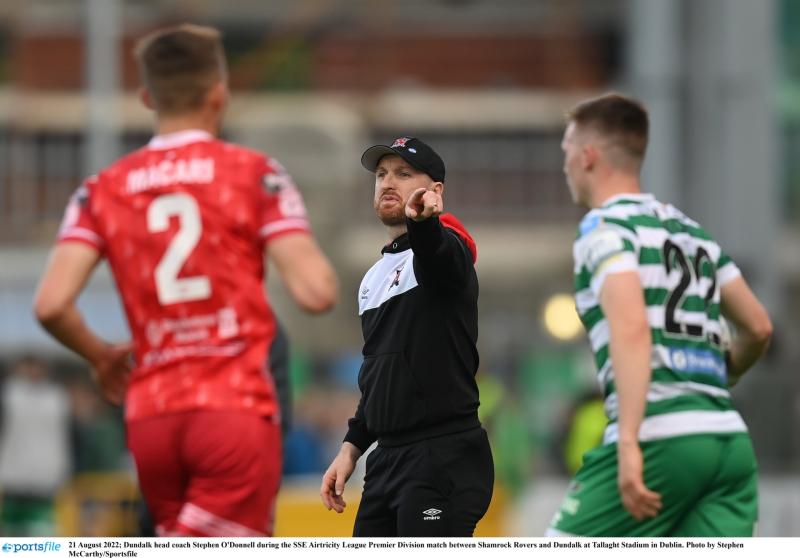 The direct approach adopted by SSE Airtricity League leaders Shamrock Rovers against Dundalk FC on Sunday was perceived as a mark of respect by Stephen O’Donnell.

Dundalk’s hopes of pipping Rovers to the title went up in smoke following a sobering 3-0 defeat at Tallaght Stadium, but O’Donnell saw the pragmatic game plan utilised by The Hoops as an indication of how far his young squad has progressed throughout the year.

“I think it’s respect,” the Dundalk head coach said afterwards. “Rovers wouldn’t be that direct against any other team. I’ve never seen them do what they’ve done, so it’s a little bit of respect.

“We just gave away terrible goals. Obviously, Rovers had a game plan. They were just launching and we didn’t deal with it well enough. We had good passages, but ultimately, if you give up such goals, you’re not going to win games.

“That’s the way Rovers play. They press with three and get space around them, but obviously their game plan worked better than ours because they just launched it up on top of three lads. They thought we would probably play a high line, and we didn’t deal with it well.”

Andy Boyle missed out on Sunday through suspension, while Robbie McCourt pulled up injured and had to be substituted after just 26 minutes, leaving The Lilywhites playing with a makeshift back-four against a team that has won the league two years running.

However, O’Donnell was bitterly disappointed in the manner in which his team conceded, with all three of the Rovers goals almost identical to each other in nature.

The Dundalk boss is certain, though, that his team will learn from the experience, and come back stronger in their pursuit of silverware in the not-too-distant future.

“Obviously, we have a few players out, et cetera,” he added. “It is a baptism of fire in regards the little reshuffling of a backline, but our lads will get better from the experience.

“We probably haven’t faced that. They were direct against us at Oriel as well. They identified it, they capitalised on it, and probably both boxes was the difference; Alan Mannus made a lot of very good stops.

“People are going to look at the scoreline, but I thought we started the game really well. We got in lots of good areas. When you concede the third, the heads drop and the game sort of meanders, but in regards the goals we gave away, we’d be really, really disappointed.”