Stephen Bradley keen to bring success back to Dundalk FC 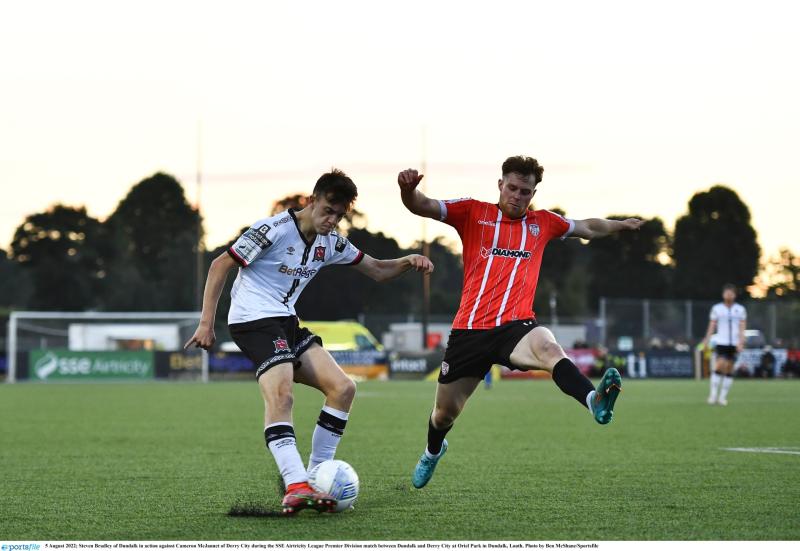 Steven Bradley in action against Cameron McJannet of Derry City during the SSE Airtricity League match between Dundalk and Derry City at Oriel Park. (Pic: Sportsfile)

Creator-in-chief for a last-gasp Dundalk FC equaliser on Friday night against Derry City, Steven Bradley was left frustrated to come away from Oriel Park with just a single point.

After going behind to James Akintunde’s opener on 12 minutes, The Lilywhites huffed and puffed for the remainder of the match in search of a leveller that would keep them above The Candystripes in second position in the SSE Airtricity League standings.

And, luckily for Stephen O’Donnell’s team, a 1-1 draw was rescued in the dying embers.

“I thought we were unlucky not to get the win,” Bradley told The Democrat afterwards. “They wasted a lot of time and stuff like that, so it got frustrating at times that we couldn’t get that goal.

“I thought we had a good few chances and then obviously to get that last-minute equaliser was brilliant. It’s still a bit frustrating because we did want the three points, but it was a good overall team performance.”

It was in the third minute of stoppage-time when Bradley cut inside Patrick McEleney before playing a sublime ball into Patrick Hoban, and he equalised with a bullet header.

“Sometimes I get moaned at for not crossing the ball as much,” he laughed. “It’s because I like to come inside and try and make goals myself, but late in the game, I thought, why not stick it in?

“We’ve got a top striker like Pat, who’s always going to be there. I put a few in when I went down the line tonight and he was unlucky not to nick it.

“Apart from that, I’m proud of the boys for having that mentality and strength to not give up until the very end.”

With that 93rd-minute leveller, Dundalk extended their unbeaten home record in competitive matches to 14 games, but Bradley feels the performance merited a win.

“Teams come here and I feel like they fear us because of our home record. I thought Derry were good in spells and defended really well, but I think overall, we were the dominant team, we created more chances and we were really unlucky not to win.

“There’s a good few of the boys that are frustrated we never got the three points, but at the end of the day, that’s football and I’m just glad we never lost and we keep fighting now.”

That fight continues against Bohemians this Friday night at Dalymount Park – a ground in which Bradley scored in Dundalk’s last visit, a 2-2 draw back in February.

Just a third victory on the road this season carries the possibility of The Lilywhites closing the gap between themselves and Shamrock Rovers at the summit to three points.

“The first time we played there this season, I thought it was a tough place to go to, but obviously that was early in the season and the boys were still gelling then. I think going into that next week, we’ve just got to be confident.

“Our away form hasn’t been as great as we’d like, but hopefully that’s going to change soon and we can go and get the win and keep fighting for the top spot.”

Bradley, a 20-year-old Scottish winger who joined the club at the start of the season on loan from Hibernian, has impressed with some dazzling performances in Irish football.

However, the plan for the Glaswegian is to return to the Scottish Premiership at the end of the year, where he is hoping to add to the five appearances he’s so far made for Hibs.

“There’s a new manager (at Hibernian). I’ve not met him face-to-face yet, but I’ve spoken to him through the phone and he just told me to keep doing what I’m doing.

“He’s seen clips and he’s happy with what he’s seen. I keep in contact after every game with our loans manager and we have a chat and that. I’m looking forward to trying to go back and get myself in that team. I think I’ve got a good chance of doing that to be honest.”