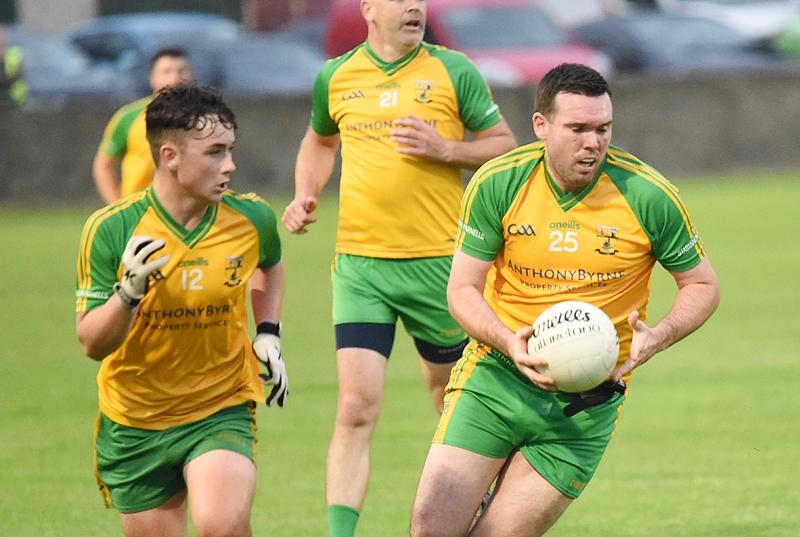 Niall Cluskey on the attack for Stabannon with cover from Johnny McGee. (Pic: Arthur Kinahan)

Annaghminnon Rovers ensured that they will finish ahead of Dowdallshill in the Division 3B table after this comfortable win over the Dundalk side at Stonetown on Friday evening.

Goals from James O’Connor, Dwayne Markey and Tony Brennan proved decisive as the hosts got the better of the Hill once again this season.

However, it wasn’t all plain sailing for Rovers as they were not at their best in the opening half, the visitors enjoying a good share of possession. But they made life difficult for themselves by kicking 12 wides over the half hour.

Annaghminnon took full advantage as they went in with a 1-5 to 0-4 lead and didn’t look back after that. The second period was dominated by the hosts and they added two goals to ensure that Cathal Sheridan’s late goal for the Hill was little more than a consolation.

Stabannon Parnells maintained their lead at the top of Division 3B when they proved too strong for Sean McDermotts at home on Friday evening.

The Seans went into the game boosted by their first win of the season in their previous outing, but this was always going to be an uphill struggle against the league leaders and in the end the hosts were comfortable winners.

The Seans did get off the mark through Marty Duffy but it wasn’t long before Parnells began to assert their authority as Robbie Callaghan, Derek Crilly and Harry Butterly all found the target, on their way to a 0-7 to 0-3 half time advantage.

The second half saw Stabannon continue to dominate with Niall Cluskey and Butterly adding points, while Crilly scored the only goal of the game to put the outcome beyond doubt.

The McDermotts can take positives from a performance that also saw Kevin McMahon, Colin Curran and Declan Carroll among the points.

Wolfe Tones maintained their chase for the Division 3B title when they eased to victory over Cuchulainn Gaels in Omeath on Friday evening.

Goals from Chris Cudden and Mark Healy were instrumental in a victory that sees the Drogheda men continue their resurgence of recent weeks.

At one stage it appeared that the Tones were out of contention for silverware, but they have battled their way back into the mix and can now look forward to a potentially decisive clash with leaders Stabannon Parnells this weekend.

Aside from the goals, the Tones had important scores from Emmet Judge, Eoghan Brennan and Garrett Cooney, while Micheal and Seamus McCabe accounted for the Gaels points.

John Mitchels are now one point behind St Nicholas as the two sides played out a thriller on Friday night in Páirc Sean Misteal. There was a lot at stake with both teams still in contention in the Division 3B promotion play off slot.

Both sides threw everything at each other in the cagey opening. It was the home team who struck first, taking a two point lead through John Gallagher and Robbie Coyle. The Nicks struck back with a Fionn Meagher free. Both teams exchanged points with Paudi Downey on target for the Nicks.

A Gallagher free restored the Whites two point cushion with five left in the half. The Nicks rallied late on with points from Caebhan Housidari and Sam Reilly to go in all square 0-4 each at the break.

The second half was much the same with neither team holding back. As in the first half it was the Mitchels who hit the front again, opening a two point lead. The Nicks replied through Rian Farrell, but midway through the half John Mitchels extended the lead again thanks to the prolific Gallagher.

In the final stretch, the Nicks had brought the gap back to two with points from Shahin Housidari and Hayden Quinn, but the Mitchels would hold out.