Inside Track: Steely-eyed Harrington gets the better of Stricker this time 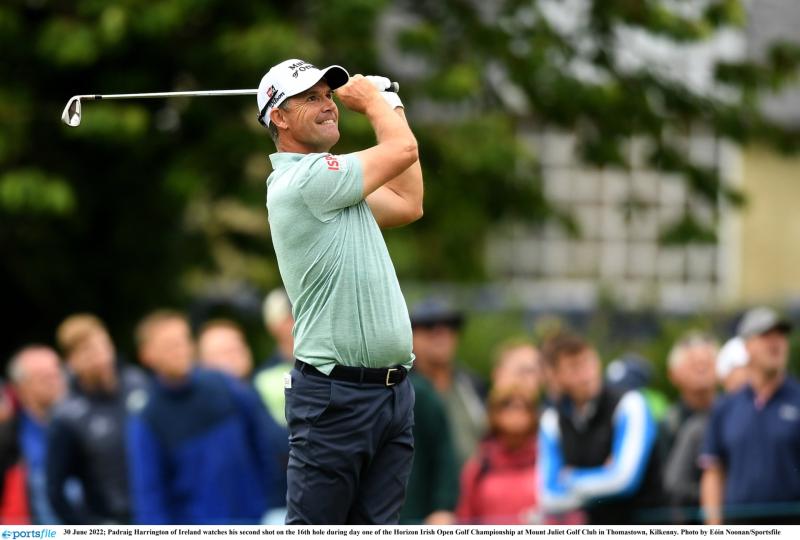 Padraig Harrington in action during the recent Irish Open. A few days earlier he was claiming victory at the US Senior Open, pipping fellow Ryder Cup captain Steve Stricker to the title

Maybe I got it wrong, but was there not a Ryder Cup-type hostility about the final day of the recent US Senior Open at Saucan Valley Country Club in Pennsylvania? Maybe it was just the home crowd urging on their own man, or me, once again, inflicted by paranoia.

What you had was Padraig Harrington and Steve Stricker slugging it out as the competition drew to a close. Harrington was a mile clear going into the final round, but faltered. And as the Dubliner struggled, Stricker made steady progress. It was between the pair as the finish-line approached.

It wasn’t the first time they had eyeballed each other. Harrington was Europe captain at the most recent Ryder Cup – Stricker had charge of the US team and got the decision, his side winning with plenty to spare. It just didn’t work out for Harrington or his charges.

Stricker put in an impressive last round at Saucan Valley, his 65 bringing him to within a shot of Harrington, who had three to play when with the American made it into the clubhouse.

When interviewed on television, Stricker – and the chap with the mic –  wasn’t so much focused on his final round, but on how Harrington might finish.

Fair enough; but never was it ‘Padraig’, or ‘Harrington’, or even the ‘leader’. Instead, we had ‘him’ this and ‘him’ that. Anyone tuning in at that point wouldn’t have known who the two were talking about. Not once did either of them identify who ‘him’ was.

And the American commentators?  Every putt Harrington faced up as he defended his one-stroke lead over the last three holes was ‘difficult’, and maybe it was, but you – nor I – got the impression they wanted him to miss. The crowd had more to offer their man as he completed his round, and again, perfectly understandable.

I particularly enjoyed Harrington’s British Open win, the one in which he nicked it from Sergio Garcia in a play-off. (I’ve enjoyed it even more on hearing Garcia is among those looking for pension money from the Saudis.)

But this was even better, and forgive me if I borrowed from the loudmouth home supporters when I shouted at the telly, “Get in the hole” as Harrington rolled in that four-footer on the 72nd green. The Dub was smiling afterwards, but, as always, had been steely-eyed as he went about keeping Stricker at bay.

I often think it was this trademark stare – when he’s chasing victory - more than anything else that sunk Garcia at Carnoustie 15 years ago. The pair crossed paths at a crucial stage, and if he was expecting Harrington to say something like, “Buenos tardes”, or even “How’s the form, pal”, the Spaniard was sadly mistaken.

I’m looking into the past – again, says you – to the time Harrington took off on his professional career. Gordon Richardson was covering golf for RTE radio at the time, and he had difficulty pronouncing the Irishman’s Christian name.

“Pad-rig” was the best he could come up with, but in time, as the former winner of Dundalk’s Scratch Cup made progress in his professional career, Gordon got it right.

Let’s be fair about this: the American television guys get the name right. The hope is they’ll be calling it out many times more as the big man tussles with the oldies and others.