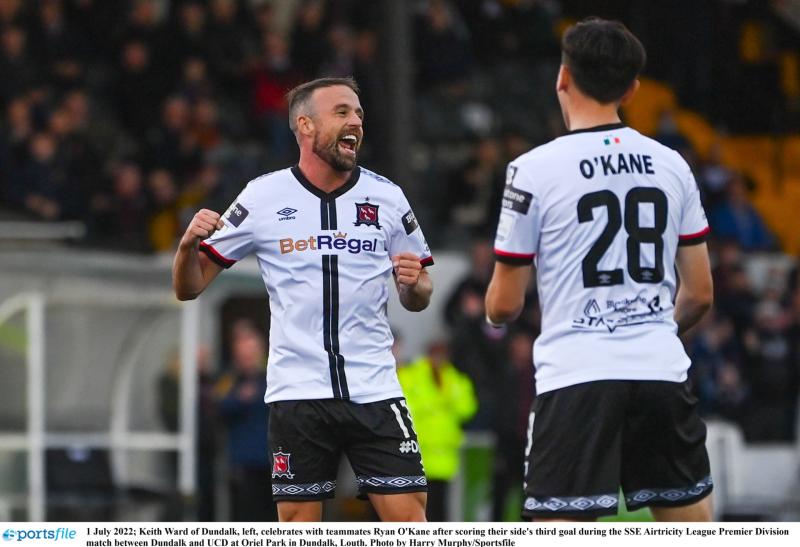 Keith Ward was delighted to get off the mark in what is his third spell for Dundalk FC in last Friday night’s 3-0 SSE Airtricity League win over bottom-of-the-table UCD at Oriel Park.

After some excellent work down the right from substitute John Martin following a quick Nathan Shepperd release, Ward, who had also come off the bench, netted with what was the last kick of the evening – scoring a first goal of any description in almost two years.

The last time he rattled the net came when he was playing for Bohemians in a 2-1 win over Derry City in September 2020, while his last Dundalk goal came in a 5-0 EA Sports Cup semi-final victory over Wexford back in 2014.

“It’s something throughout my career I probably haven’t done enough, score enough goals, but I was delighted,” he said. “It’s something I’m trying to work on still at 31, trying to score more goals.

“Obviously I like to try set them up and create them, but John done brilliant to be fair. He broke well from a corner. I just tried to get myself in the box and the right-full kind of slipped a bit and I just tucked it away. It’s nice to get a goal and help the team as well.”

Before speaking with reporters on Friday night, Ward enquired about the full-time result in Ballybofey, where Shamrock Rovers had narrowly beaten Finn Harps by a score of 1-0.

With two games in hand on the table-toppers, Dundalk will be eager to keep the pressure on Rovers, who Ward believes haven’t been capably challenged over the past two seasons.

“Rovers have been the top team the last two, three years. They’re brilliant, but that’s what we’re aiming to get to. To be fair to the gaffer, he says that we’re not looking at what’s behind us, we’re looking at what’s in front of us. There’s nothing wrong with that.

“We want to put some pressure on them because I don’t think anyone’s put it up them the last two years. We just want to do as well as we can, put a bit of pressure on and see where we are at the end of the season.”

Next up for The Lilywhites is a Louth derby against Drogheda United at Head in the Game Park this Friday – a ground where Dundalk were beaten 1-0 on their last visit back in March after Dean Williams converted what was a contentious second-half penalty.

“I don’t think it’s revenge. We played them here (at Oriel) and we put in a good performance. It’s just keeping that consistency and putting a statement out there that we turn up every week and we put it up to everyone.

“You want to put that fear maybe that everyone had about Dundalk over the years, the last ten years. I know that from playing at Bohs coming here.

“You’re going to Oriel; the place does be rocking with a top team – you want to put that kind of factor back in that Dundalk have had and try get that back.  We’ll turn up next week and even though it’s a derby, you don’t look at it that way. It’s just three points.”