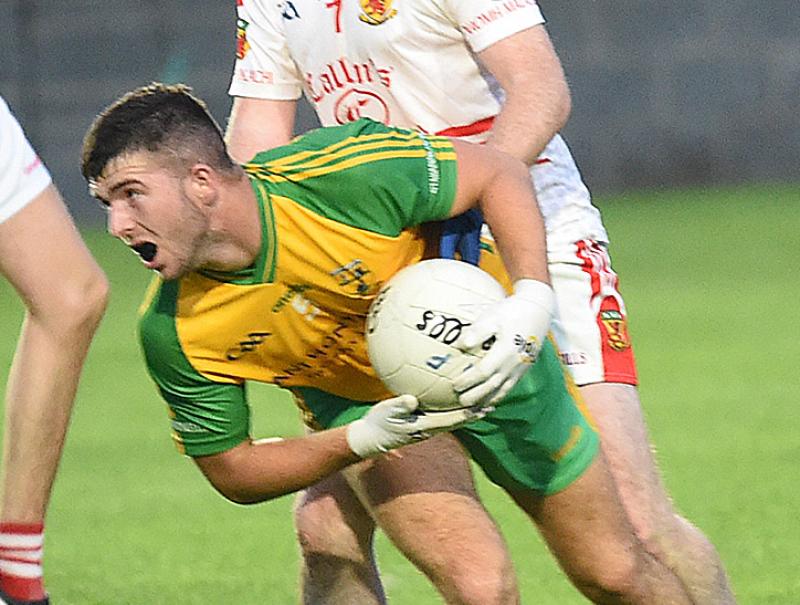 Annaghminnon Rovers upset the odds in Stonetown on Saturday evening as they claimed a five-point win over John Mitchels.

James O’Connor was the scoring hero for the hosts as he bagged a hat-trick to help Rovers claim their second win of the campaign.

The Mitchels had suffered a hugely disappointing defeat to Stabannon the previous week and they appeared to be affected by that result in the opening period as they managed to put just two points on the board.

O’Connor made them pay at the other end as he scored two goals to see his side lead by 2-2 to 0-2 at half time.

The Ballybalie side dominated possession in the second half and found the net through Trevor Matthews. However, it wasn’t enough to save the game as O’Connor completed his hat-trick and Shane Russell also found the net to secure victory.

Wolfe Tones finished strongly to maintain their good run of form as they scored a five-point win over Dowdallshill at St Brigid’s Park on Saturday evening.

The visitors had the upper hand in the opening period and Darren Weldon chipped in with some important scores as his side led by 0-8 to 0-3 at the break.

The Dundalk men enjoyed a strong third quarter and goals from Noel Finnegan and Martin Og O’Brien had them leading by 2-6 to 0-9.

However, the lead was short lived as Adam Gartlan found the net to wipe out that advantage before Weldon continued his fine scoring form to keep his side in front. Chris Cudden scored a late goal to seal the victory.

Páirc Mac Diarmada played host to an exciting and hard fought Division 3B encounter on Saturday evening, as St Nicholas overcame the hosts to stay in second place just behind Stabannon Parnells.

The Seans played the first half with the aid of the breeze and registered the first score from play but Hayden Quinn and Aaron Flanagan soon replied for the visitors to edge the Nicks ahead.

McDermotts were reduced to 14 men and Fionn Meagher smelt blood to hit the back of the net at the end of the first half to leave the visitors up by two at the break with what proved to be the crucial goal.

Caebhan Housidari and Sam Reilly opened their sides tallies as the lead changed hands on numerous occasions, mainly due to the Seans finding the net twice through Sean Martin and full forward Lorcan Myles.

The Nicks kept composure down the stretch and despite losing a man to a straight red card they managed to finish the stronger thanks to points from Quinn, Housidari and a fine Phillip Kirwan point in injury time that would seal the two points.

Division 3A Roundup: Glen Emmets one more win away from promotion

Stabannon Parnells travelled to Omeath on Saturday evening and came home with a comprehensive 18 point victory over Cuchulainn Gaels.

After a cagey enough start where the Gaels played a rigid defensive style, Stabannon wasted a few opportunities for points. The first score of the match was a Stabannon goal, the first of a hat-trick on the night for Harry Butterly.

Gaels did create a few opportunities, McDonald brothers Cian and Eoin, converting two while two others came off the post.

After one of the balls struck the post Stabannon broke at pace, Patrick Bell who started the move, continued his support run and the ball was fed out to him on the right and he was allowed to run further forward, before hitting a shot that deceived Seamus Quigley in the Cuchulainn net.

Bobby Butterly finished off Stabannon's third goal to make it 3-7 to 0-2 at half time. In the second half Stabannon rung the changes but that didn't impede their dominance too much, Dean Lynch, Niall Fanning and Tadgh Carroll all came on and performed well.

However out of all the changes Mark Byrne caught the eye the most. Butterly completed his hat trick and Mícheal McCabe found the range five times.