The clue to how I feel about the Fiat 500 was the last line of my review last week, so you’ll probably sussed the result of this review.

I love it. And here’s the basic and common sense reason why. If a Fiat 500 meets your current motoring needs in terms of seats and journeys, then the electric version will do the same and be everyday liveable with.

You won’t already be using it as a family car as let’s face it, it’s a bit small.

You won’t be commuting up to Donegal or down to Kerry regularly as it is not the most suitable car for that.

What it is perfect for is getting around a city and its suburbs. So when Fiat targeted the 500 to be their first all-electric car, specifically designed for that purpose at the outset, it is perfect.

There was a 500e sold in America for a while but the accolade for being Fiat’s first all-electric car is this new 500e.

The 500e is most fun you can have on four wheels. Every mundane trip is transformed driving the 500e and it always brings a smile.

It is very comfortable and quiet and has that small car zippiness added to the immediate availability of power you get from an electric engined car. It’s the best of both worlds. Physics defyingly for a small car, it feels planted and solid and how a much larger car feels. It’s quite a trick that Fiat have pulled off here.

The suspension worked its magic to avoid me getting a stiff back and darting here and there in it was effortless.

Being electric the running costs are a lot lower compared to petrol and diesel and if you have a home charger then you’ll save on the additional coffee costs by avoiding petrol stations. There are two battery sizes to choose from. A 23.8kWh one starting at €24,995 giving a range of 180kms. The larger 42kWh battery gets you an extra 140kms.

Or even further in the city using Sherpa mode which cuts power to non-essential items and a claimed 400km range. Charging times are good too with a fast charger rate, 85kW/hr, charging it to 80% in just 35 mins.

There are 4 trim levels with the La Prima trim tipping the scales at €34,995. Last week I was in an electric SUV from MG for a grand more and given the compromises I’d have to make to live with a 500e I’d opt for the MG.

However, it would break my heart and before I’d do that, I think I’d try to find a way to fit the 500e into my life. I really was smitten.

The outside hasn’t strayed far from the existing 500 look, thankfully because the 500 is the byword for cute in the motoring world.

The most noticeable change is the split front lights that have the DLRs in the bonnet with the car being bigger all round.

The interior of the 500e is style overload and typically Italian. I love the Fiat stitching on the seats.

Back seat passengers won’t be feeling the love for the 500e as it’s a bit cramped and your knees are up too high and there isn’t a lot of headroom. I’d take a lift in the back into town, but not to Mullingar. Best for smaller/younger kids.

The boot is for shopping only and not much of a big shop either. Getting stuff in and out through the rear hatch is easy enough and for bigger items you need to fold the rear seats as all current Fiat 500 owners know only too well.

It has electric release doors that I only realised were there a day after I got it as I was using the manual release lever in the bottom of the door storge compartment. That had me fuming how bad it was. Was I embarrassed? Much.

The dash layout is pure perfection. Everything falls easily to hand and the infotainment system screen is easy to use, functional and not distracting. 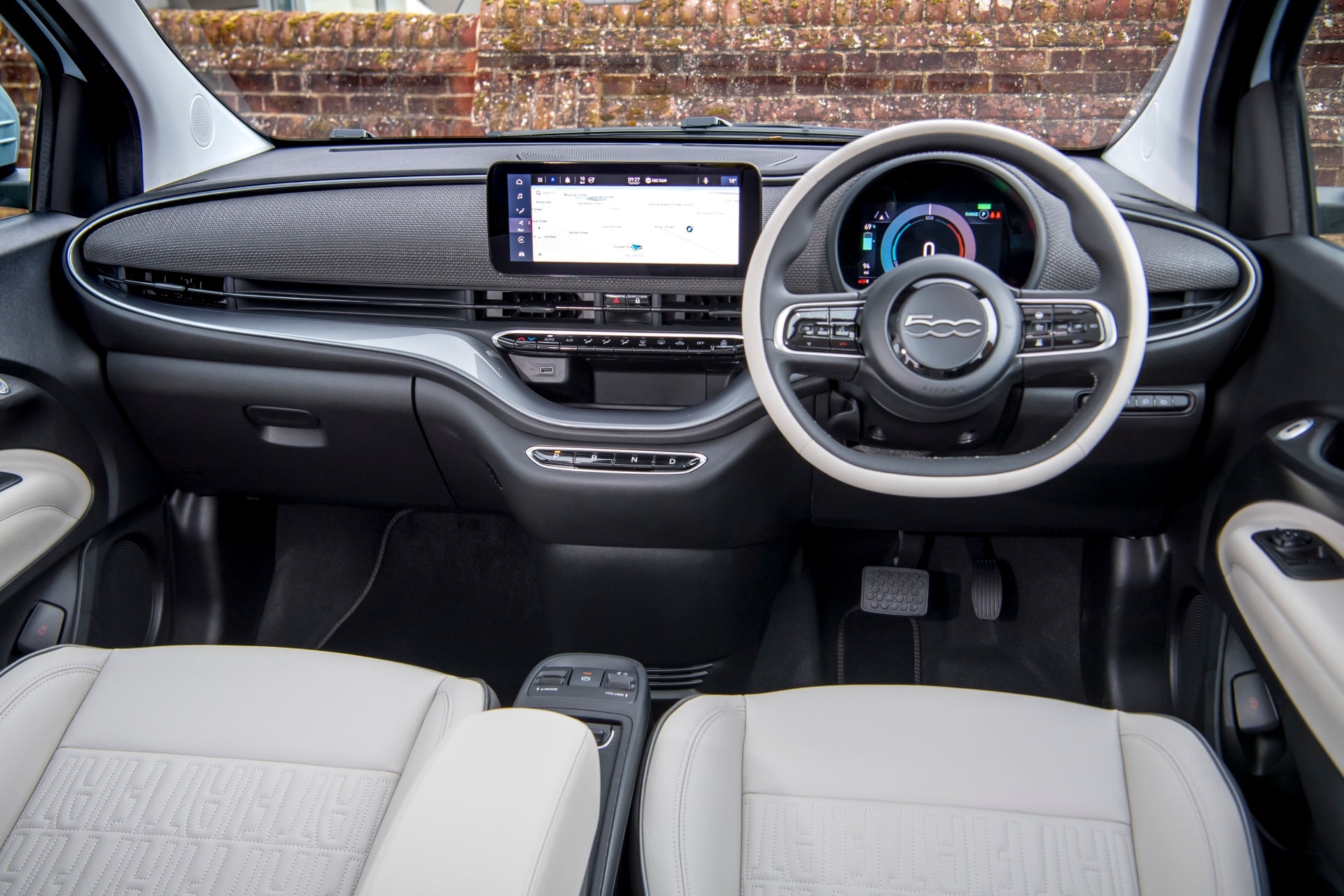 There are station and volume controls on the back of the steering wheel which is the way it should always be done. Drive selection buttons are just below the infotainment screen and central where there are other buttons for climate control. Just spliffingly perfect again. All the buttons feel top quality and pleasing to use.

The reversing camera stood out as it had quite a good hi-res display and the secret cupholder is pure Italian genius.

It is not a perfect car as it’s a bit pricy but that price isn’t because it is electric, it’s because it is already a highly desirable and fashionable car and Fiat, rightly, are charging a premium for it.

I’ve always said that one day I’ll own a 500, in Lounge trim, in white of Cha Cha blue, with a TwinAir petrol engine. Now I’m not so sure. I think the 500e, in grey, has stolen that ambition from me. I’m not complaining.