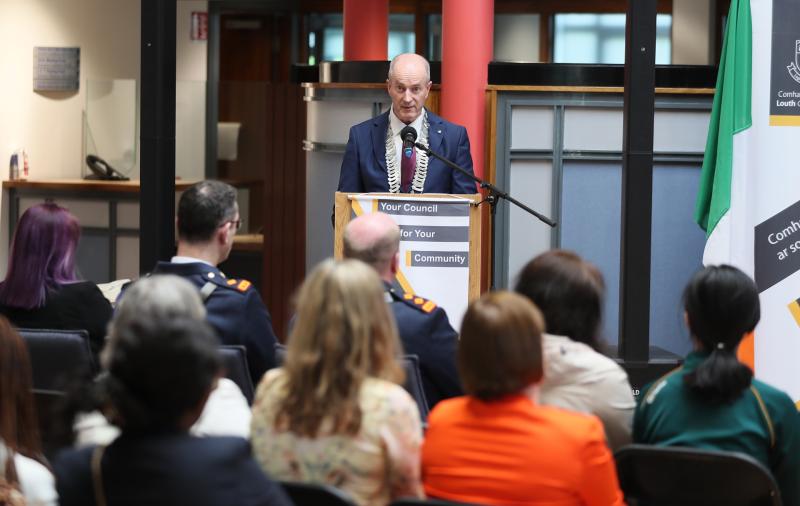 To coincide with national efforts to acknowledge the contributions of volunteers during the pandemic, Louth Volunteer Centre with the assistance of Louth County Council held a ‘Covid Volunteer Recognition Event’ in County Hall, Dundalk on the evening of Thursday, 19th May 2022.

The evening began with a live video link to Dublin Castle where the Minister of State, Joe O’Brien T.D., spoke to all Volunteers both in Dublin Castle and throughout the country at various venues who simultaneously held similar events.

This event was one of a number of initiatives held during this, the 2022 National Volunteering Week.

“The efforts of Volunteers here today simply cannot be over praised, to many people the work done by you the Volunteers was the lifeline to keep them going.”

“The events being held across Ireland this evening highlight recognition of the importance of valuing volunteers and volunteering, and showcasing the difference that volunteering makes in communities.

"Volunteering is a key part of the community response to any emerging situation. While many services effectively shut down, in certain areas there was a greater demand for volunteers than ever before.”

The Chief Executive of Louth County Council, Joan Martin spoke of existing links having been made stronger between the council and the Volunteer community on foot of the creation of the Community Call Line during the pandemic and praised all who assisted those in great need.

A total of 87 Individual Volunteers were recognised at the event, having been selected through a nomination web portal and assessed locally by the Volunteer Centre.

The volunteers who so generously gave their time freely in response to the pandemic, performed a variety of tasks, from cooking and delivering meals, collecting and delivering shopping and prescriptions, giving people lifts to hospital and appointments when restrictions were at their highest, fundraising, sourcing and obtaining PPE for vulnerable groups, writing to nursing home residents, and being an ear at the end of the phone for those who needed it, to name but a few.

A letter of thanks from An Taoiseach was provided to all Volunteers nominated, along with a badge designed by primary schools organised by the Department of Education. A goodie bag was also provided by Louth County Council as a token of appreciation.

Chief Superintendent Alan McGovern, and Superintendent Charlie Armstrong representing An Garda Síochána joined the celebrations to show appreciation of Volunteer efforts on behalf of the Louth Branch of the Gardaí.

The event was also attended by local Councillors, Senators and Oireachtas Members, with professional musicians, Glas Quartet bringing a beautiful classical touch to the evening.