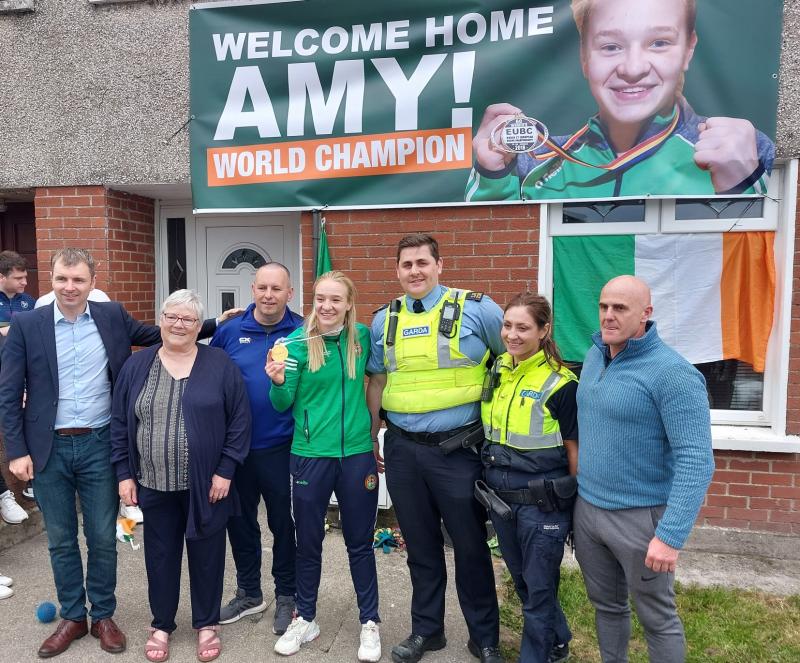 Arriving in style via an open-top car, the fighter was greeted with applause and chants of ole, ole, ole as she rounded the corner, lead by a garda escort.

“It’s unbelievable, I never thought the gards with be at my house for this,” she laughed.

“This is crazy. I watched Katie Taylor ten years ago when she won the Olympics in Bray when she had the whole of her estate out and the fact that it’s happening to me now ten years later… the support is just unbelievable.

Reminiscing on her long journey, she recalled bucket collections to raise funds to travel to World Championships and the help she received from her local community.

“I remember I was going to India [for the last World Championships] and I had made the quarter final over there and was very unlucky not to take the medal home because I was against the Indian boxer, and there’s been times when my parents and my family have had to put up with the worst of me because I’ve thought I can’t do this no more, mentally it gets really really tough.

“I’m standing here now as the World Champion and only five people in Ireland have done it, names like Michale Conlon, Katie Taylor and Kelly Harrington and now I’m one of them names.”

She revealed that it was one of those names, Katie Taylor, who sent a video chanting ole,ole,ole to congratulate her on her win.

She also described how hard it was to go so long without competing through Covid and injuries.

“I was sitting in my room yesterday and I was a bit tired and I was scrolling and I saw the support from everybody at home and I actually got a bit emotional because it’s just… how does this happen?”

Describing her feelings going into the final she said:

“There’s was not one part of me that was nervous, I just soaked it all up and loved every minute of it.

“I actually knew people back home were watching but there was no pressure because I was in a little bubble and I thought to myself, the five-year-old that started boxing twenty years ago is now in a world final, go in and take it with both hands, this is what I’m born for, this is why I do this.”

She concluded by saying:

“Thank you very much to every single one of yous that have come out today. My aunty’s here, my grandad came up to the airport, he’s 86, and I never ever ever thought I’d see this and I just want to say thank you very much for all the support from everybody, you’ve been incredible with sponsorship and edging me on when things got tough. Thank you very, very much.”