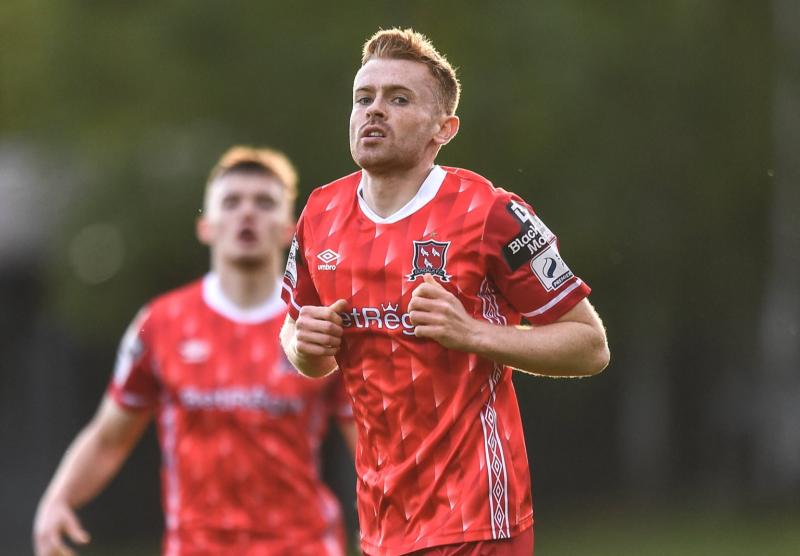 Dundalk's Paul Doyle during the club's recent clash with UCD at the Belfield Bowl. (Pic: Sportsfile)

Paul Doyle may have scored his first goal for Dundalk FC last Friday night, but the Westport native left the Belfield Bowl disappointed after The Lilywhites surrendered a two-goal lead to draw 2-2 against the SSE Airtricity League’s bottom side, UCD.

The 24-year-old, who played over a century of games for UCD between 2018 and 2021, opened the scoring in the first half, drilling through a body of players, before Patrick Hoban added a second from the penalty spot for ten-man Dundalk in the 54th minute.

However, Colm Whelan’s two goals for The Students, the second of which was a penalty, ensured Dundalk’s wait for an away win this season would go on a little while longer.

“It’s two points dropped. The goal really doesn’t mean a whole lot to me. As you said, it’s nice to be off the mark, but it’s all about getting three points and we’ve dropped two.”

Damien MacGraith’s decision to award the penalty drew criticism from Stephen O’Donnell, although Doyle admitted he himself didn’t have a good view of the incident.

“I didn’t really have much of a view because I was marking. When you’re focused on marking someone, you’re just completely focused on that. I didn’t actually see what was around me.

“(The officiating) was probably frustrating throughout the game. It was so stop-start with free-kicks and everything. Even the first half before, when we went down to ten men, it was hard to get a rhythm in the game at all because it was just free-kicks here, there and everywhere.

“It was a very bitty first half, there was no rhythm to it. It was frustrating because I felt like we were beginning to get control probably five or ten minutes before half-time and then the sending off kind of just makes it a different game, doesn’t it?”

O’Donnell also praised Doyle’s performances in recent weeks, but the midfielder who has now started the last four matches, wasn’t satisfied with his own display on Friday night.

“I feel like they’ve come up a good few notches since the start of the season, probably getting fitter as well. I think that’s a big thing – getting match fitness and getting games in. You improve game by game, but to be honest, I was actually disappointed with tonight overall.

“You might come away saying that you scored a goal, but I wasn’t actually that happy with my performance overall. Personally, I would like to pick it up next week. We just have to put it behind us. It’s a big game again next week, so you’ve got to switch focus to that.”

Dundalk look to get back to winning ways when they play again this Friday, with Bohemians the visitors at Oriel Park, where The Lilywhites are now unbeaten in seven matches (five wins, two draws).

“Bohs are always a tough game. They’ve got good attacking threats and good options going forward. We just have to crack down from tomorrow morning again and go through the gears and get ready.

“We’ll be prepared, it’s never something that we’re not. We’re always really well prepared and the gaffer has us well drilled and everything, so it’s just on us to turn our performance around next week and get three points.”