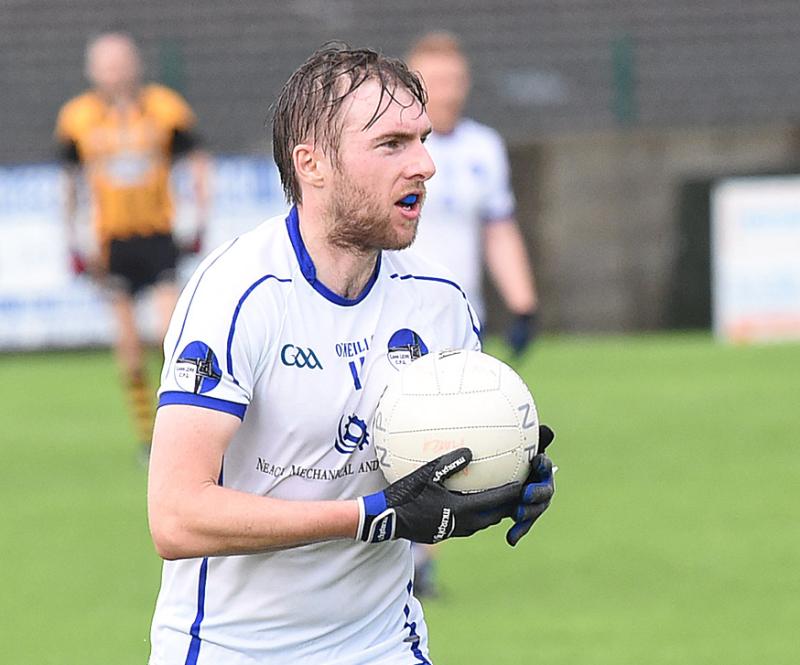 Colin Murphy grabbed 2-4 for Lannleire in a comprehensive victory over the Westerns. (Pic: Arthur Kinahan)

Hollywood Developments Division 3A Round Four

It was one of the most one-sided games on record in the history of Louth league football, as Westerns succumbed to Lann Léire on Saturday night.

That makes it two wins in a row for the Dunleer men after their loss to Glen Emmets the first day out. Paul Callan shone at full forward while Colin Murphy was top scorer once again for Glen O’Reilly’s determined outfit with 2-4 on the night.

At half time it was 7-9 to 0-1, Anthony Durnin once again battled for his side with three points over the hour in Dunleer, but it was a tough night for the Reaghstown men.

A first half flurry of four goals sent fabulous Glen Emmets home from Courtbane with victory over Naomh Malachi. A notable name on the team sheet for the home side was Kevin Rogers. The former Louth forward is home from Australia for a number of months.

Paul Burke gave the hosts a brief and early lead before Ray Lambe’s in-form outfit buried three goals inside the opening quarter. Ronan Grufferty with two majors after James Butler opened the scoring for his side with a goal.

Shane Rogers kicked his side's last point of the half, but Butler would add another goal for the table toppers to make it Glen Emmets 4-6, Nh Malachi 0-3.

The returning Rogers claimed a goal midway through the second half but Damien Grimes would bookend the procession with points along with Alex Carolan in between. The Tullyallen men remain unbeaten in the opening three games and don’t look like being caught.

Understrength Glyde Rangers pulled off a crucial early season victory over Na Piarsaigh to stay in the hunt for promotion while also nudging their Dundalk counterparts down to the chasing pack.

These ties are always tight affairs and this was no different as the sides were level at the break, Rangers 0-8 and Naps 1-5. Conall Shields came up from the back to find the net for the Dundalk men.

Fergus Flynn’s Glyde outfit started the second half much brighter with Trevor O’Brien, Barry Brennan and midfielder Ciaran Sheridan combining for three goals after the break.

Nine points up with four minutes to go, Shorty Treanor’s charges roared back into the game with two late goals but that wouldn’t be enough as the home side hung on.