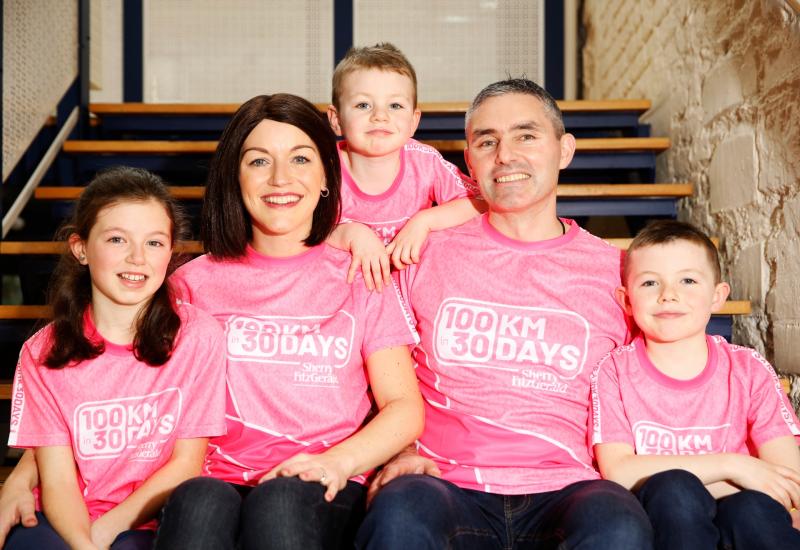 Lorna Clarke with her husband and children Eabha, Noa and Rial

One Monday night, Knockbridge woman Lorna Clarke put her three kids to bed, had a shower and then found a lump in her breast. She was entirely certain that it was a cyst.

After all, she was a fit, healthy 36 year old with no family history of cancer.

Lorna was diagnosed with breast cancer in March 2021 and had surgery in March and then again in April.

Fast forward a year and Lorna has just recently had her one year checkup and was told that she is cancer free.

Eager to give back and return the support she received throughout a difficult year, Lorna is Louth’s ambassador for this year’s 100k in 30 day fundraising appeal for breast cancer.

An initiative founded by Blackrock couple Niall Carroll and Cara McAdam and launched in 2020 after Cara was diagnosed with breast cancer.

Lorna explained how what initially seemed like just another good cause soon gained extra significance for her and her family.

“In 2019, I would have seen Niall and Cara doing a great job and seen the pink T-shirts and a few flags going up and stuff like that.

“But, when I look back now, you know, it was just another charity, another event.

“And to be honest, it didn’t mean anything to me personally because we’ve no family history [of cancer], and I didn’t really give it much thought if I’m honest.

“And then when I got my own diagnosis, and understood the work being done, oh my God it meant so much.

“I jumped on the bandwagon. And then when I was asked to do this, it’s part of giving back. What Niall and Cara have done is fantastic and the work that goes into it. So if I can help at all, I will.”

Lorna finished her first 100K in 30 Days in two weeks. She had no choice, as she then started 20 weeks of chemotherapy.

She has seen firsthand the difference the money raised has made.

“I was up at an appointment in the Beaumont recently, and they have the new breast cancer unit open and Breast Cancer Ireland has a facility there as well.

“It was sponsored by the 100k. It was just lovely to see the efforts of the charity coming together. The new unit is fantastic up there.”

She’s also quick to praise the vital research carried out by Breast Cancer Ireland along with the support they offer to women going through treatment.

Her doctors often reassured her by telling her about how much they had learned about breast cancer over the years and the research that guides their decision making and subsequently her treatment plan.

“When I was up and down to different appointments and for my surgeries, I would have gotten information and surveys and questionnaires and things like that.

“And, you know, I suppose in the blur, going through what I went through, I didn’t realise the different supports I was getting and it wasn’t really until after things had settled and I remember going to an appointment and this nice nurse came over to me and he said, you know, you signed up for the research and I was like, Yeah did I,” she laughs.

“First, he introduced himself as being from breast cancer research Ireland and he asked if he could just get a blood sample.

“And it was at that moment, I realised that you know, they were there in the background behind the clinics and doing their work and how important their work will be in the future.”

Lorna is philosophical about her own personal experience and, while aware her life has changed, is determined that cancer doesn’t take it over.

“You know, cancer doesn’t end after chemo. So that’s something that takes a bit of getting used to.

“You have to kind of get your head around that this is part of your life now. And it’s just about how much space you give it really.

“And that’s where I’m at the minute. Try not to give it very much space. Once all this is over, I’m hoping not to be thinking about it as much.

“It’s something I’ve given a lot of thought to. You can’t let cancer define you.

“I was lucky to be able to stay positive. And that’s not always very easy.

“ But I have a lot to fight for, you know, and kind of the message really is to say, to stay positive, even when you find it hard.

“Look around you and you’ll always find something to stay positive for.

“For me, it was my family and the children, and they kept me going through this.

“Look around you for something, you know, even on your lowest day, and you’ll find something to keep you going.

“You have to be mindful of how much you let cancer define you and how much space you give it, even in the aftermath.

“I’ve decided that I’m not gonna let it frame everything going forward.

“It was something that I did and I’ve gone through, but I won’t live in fear.

“I’ve decided not to be watching over my shoulder and looking around every corner. I’m getting on with things.

“And if it comes back, it comes back and I’ll be ready for it.”
Launching this years event Niall Carroll, co-founder of 100K in 30 Days, encouraged people to come together to fight cancer:

“The success of the event over last two years, throughout a pandemic, has spurred us on to make 2022 the biggest year yet.

“We all know someone who has or has had breast cancer and the purpose of 100K in 30 Days is for everyone, young and old, grandparents to grandkids, to have fun and get the daily steps in while raising much needed funds for Breast Cancer Ireland.

“I’m very proud of the success the pink army has achieved to date and we’d be delighted to see new faces this year.

“ I hope communities all across Ireland get behind it. Cancer isn’t defeated alone. It takes a village.

“ It’s a challenge that can be done in your own time anywhere in the world and you can even get the dog involved!”
100K in 30 Days, in aid of Breast Cancer Ireland sponsored by Sherry FitzGerald, takes place over the month of June. For more information and to register, see www.100kin30days.ie.