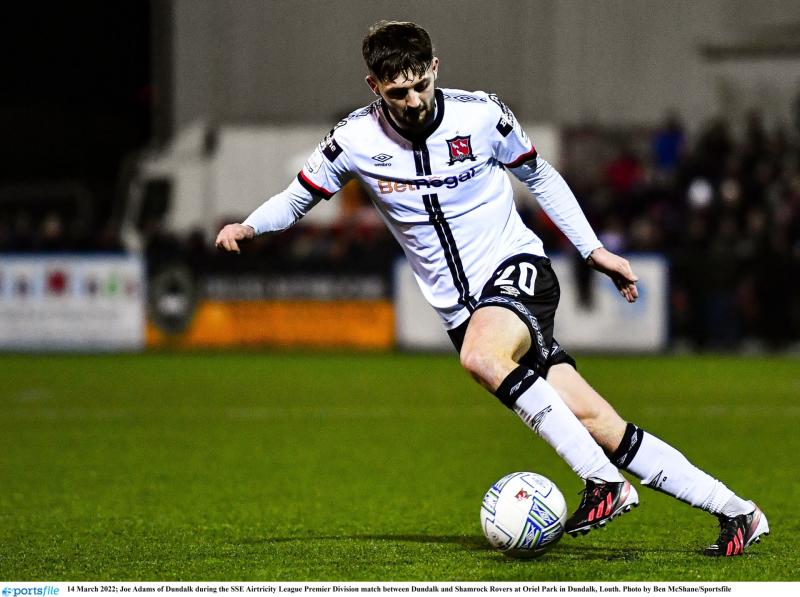 It has been a week of ups and downs for all those associated with Dundalk FC. From the highs of a comfortable win over Sligo, to the lows of a narrow defeat to reigning league champions Shamrock Rovers on Easter Monday.

But there is never much time to reflect on defeats in Irish football, your next game is often only a few days away and tonight the Lilywhites will need to brush themselves down and regroup as they host Shelbourne at Oriel Park (kick off 7:45PM).

There has been a Welsh flair to many of Head coach Stephen O'Donnell's teams this season, the Galwegian taking advantage of the loan system to bring in some exciting young talent to bolster his squad. One of those eager to impress tonight is Joe Adams.

The 21-year-old got his chance to prove his quality when replacing the injured Robbie Benson after just 20 minutes against Sligo Rovers last week. He was then rewarded with a starting XI spot for the 1-0 defeat against Shamrock Rovers.

The young midfielder has played in both a central and wide role for Dundalk, playing off Patrick Hoban against the Westerners before reverting to the wing on Monday night. If given the option, Adams feels more comfortable filling the central role.

“I enjoy playing there,” he said. “You get more of the ball in that position than you do out wide. I played there almost 50 per cent of the time with Brentford last year so I’m well used to it and I feel like I can do a good job there. I’m just hoping to get a good run of games now and get up to a good level and try and maintain that.”

The Lilywhites have turned Oriel back into a fortress in 2022, O'Donnell's troops managing to grab 11 out of a possible 15 points while remaining unbeaten at their home ground.

However under the guidance of Damien Duff, Shels have built up a decent away record of three wins and two draws from five matches- the second best record of any team in the league.

“Playing away probably suits Shelbourne a bit more,” exclaimed Adams. “They can sit in a bit more and try and catch teams on the break a bit. At home, the onus is on them a bit more to take it to the opposition so I think that’s a big factor in that record.

“We’ve proven very, very hard to beat at Oriel this year. We’ve not been beaten here and we’re looking to build on last week’s win over Sligo where we played very well. It’s important to try and make it a fortress.

“We have two home games in a row now, starting with this one on Friday, and I think this is a chance for us to start gaining points. Hopefully, by the mid-season break in May, we’ll be in and around the top of the table.”

Brian Gartland is suspended for tonight's clash after being sent off in the 1-0 defeat against Shamrock Rovers on Easter Monday while there are doubts over Robbie Benson and Dan Williams after going off in the win over Sligo Rovers last Friday night.

On the night the club will wear a one-off, charity jersey emblazoned with the logo of Watch Your Back MND. The organisation set up by Dundalk-man Roy Taylor, who was diagnosed with Motor Neurone Disease (MND) in 2018.

Each player’s jersey will be auctioned with the funds going to Research Motor Neurone, a charitable organisation for MND research.

There are a total of 24 shirts available, 21 outfield jerseys, two goalkeeper jerseys and an exclusive shirt with ‘O’Donnell 6’ printed on the back.

Bids must be submitted to auction@dundalkfc.com along with a contact name, number and the jersey you would like to bid on. The auction has already attracted bids of over €5,000 ahead of its closure at 12pm on Saturday.