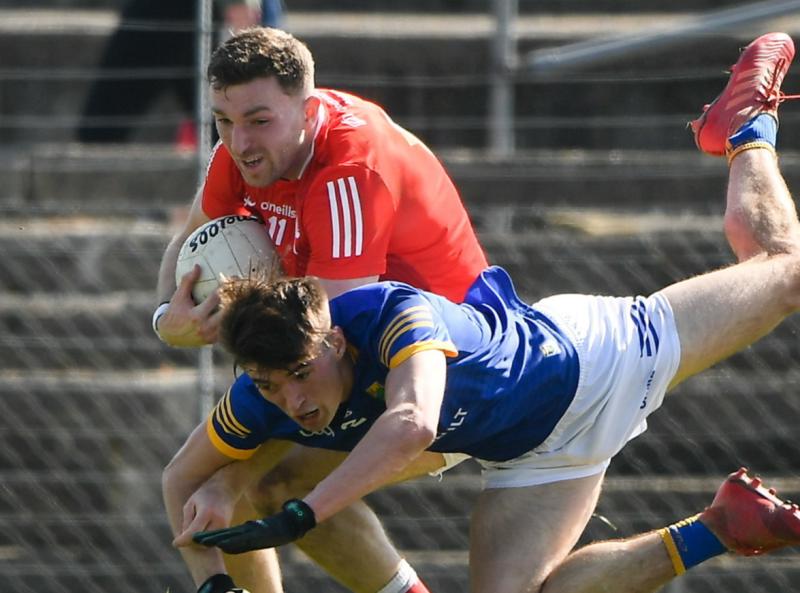 Sam Mulroy of Louth in action against Patrick O'Keane of Wicklow

Less than a day after sealing promotion to Division Two with a win over Wicklow, Louth captain Sam Mulroy was still on a high as he spoke exclusively to the Democrat Monday morning.

“I think everyone is on a serious buzz at the minute, I suppose promotion was the objective at the start of the year and it is brilliant to get that goal ticked off” he exclaimed.

“I’m delighted for the lads, the management team and everyone that is involved with Louth GAA and of course the fans, as this was huge day for football in the county. From a progression standpoint, it is vital we that we keep playing against better teams and better players.

“The real big guns are in Division One and Division Two. It will be a massive test next year, as the last time we were up there we didn’t win a game. It will be a challenge for us, and it is all about making sure we rise up to it.”

As usual, the Naomh Mairtin sharpshooter was a huge threat. He finished the league with 3-51 to his name and was the top scorer across all four divisions.

But as usual, the young captain was more worried about praising those around him, the players who help take the scoring burden off his shoulders every time they take to the field.

“It is a great accolade to have (the League’s top scorer), but it doesn’t mean much if you aren’t winning matches, that is the most important thing for me. I’m happy with my individual performances over the last few weeks and there is still loads of things I can work on.”

“We have players that can hurt you from anywhere. You have Tommy Durnin playing out of his skin in midfield, Niall Sharkey at six, Liam Jackson and Craig Lennon too. Lads with pace like Daire McConnon. It is never about one individual player.

“While I’m getting scores, there are other boys working off the ball, getting the ball into me, intercepting it, creating turnovers. On Sunday Ciaran made hay with the space that was left for him. On any day, any player could step up and take those scores which is brilliant to see.”

With promotion secured, Louth also have the added bonus of a league final to look forward to this Saturday evening when they face Limerick in Croke Park (throw in 4:45PM).

Mulroy is already envisaging that hallowed journey up the steps of the Hogan stand to collect the cup as captain and feels a trophy would be a great way to rubber stamp what has been a great campaign.

“It would be amazing, I think it’s something most of the players have dreamed of doing ever since we started following Louth Football. It would be an incredible experience and be a proper reward for the hard work these lads have put in over the last number of years.”

“After all the work Mickey, Gavin and the county board have put, this is what they want from us and it would be massive for the sport here.

“Last Sunday was incredible, the buzz on the pitch with family, friends and supporters celebrating the team, that is what it is all about. We are doing this for our clubs, for the people of Louth and another day like that, this time with a trophy on Saturday would be the icing on the cake.”