Inside Track: Tiger’s defeat was the early story from Cheltenham 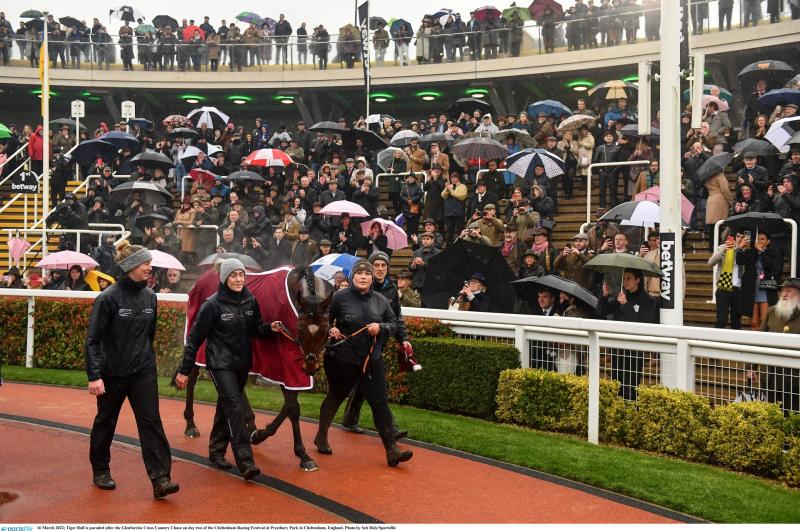 Tiger Roll returning to the parade ring after his final race. (Pic; Sportsfile)

There can only be one winner, we all thought, as Tiger Roll and Delta Work went head-to-head after crossing the last in Wednesday’s cross-country race at Cheltenham. They’ve both got the same owner and are trained alongside each other; but whereas Delta Work’s career is at its height, Tiger Roll’s is coming to an end.

This is, in fact, TR’s last race, and connections – and most in the horseracing fraternity – were hoping the dual Aintree Grand National winner can go out in a blaze of glory, scoring for the sixth time at the festival and 14th time in all.

Given that both are in the same ownership, trainer Gordon Elliott is in the happy position of not really caring which of them loses, though like owner Michael O’Leary he’s rooting for his sprightly 12-year-old, who has provided him with his greatest days in racing. Jockey Davy Russell, of course, wants his all-time favourite to make it a glorious exit.

But Jack Kennedy, Delta Work’s rider, is in the game for winners as well. There’s a percentage of the prizemoney on offer and being one who’s had an unhealthy relationship with injury, his number of winners over the years isn’t as strong as his talent deserves.

Russell and Kennedy don’t so much go head-to-head as hammer and tongs, both demanding the maximum from their mounts. Spectators among the 60,000-plus crowd who haven’t cover are oblivious to the deluge that’s emptying itself on Prestbury Park.

Tiger Roll has the call about a hundred yards from the line, but Delta Work is not giving in. Kennedy’s mount gets his head in front – at the line his lead is extended to three parts of a length. Boos are heard in the crowd – surely this is a first where a 5/2 winning fav is subject to such treatment.

Connections are not exactly punching the air, though Elliott has a warm handshake for the winning jockey, and, you can be sure, words of consolation for Russell.

Let’s speculate. Just say Kennedy hadn’t been so vigorous in his handling of Delta Work, using his whip more sparingly than he did, and at the line was a half-length down. Would it not then be said that it was all a bit of a ready-up, the race being handed to Tiger Roll, affording him the perfect bow-out?

Defeat did nothing to blemish Tiger Roll’s career. Small in stature, he wasn’t a stand-out when he paraded for the 2018 National, but just to show his win that year was no fluke he came back twelve months later to repeat the feat.

Had Covid-19 not intervened he might have created history by becoming the first to win the great race three years running.

O’Leary’s horse ran 46 times, and one of his races was at Dundalk, six years ago. Ridden by Rory Cleary, he finished second to Pat Smullen’s mount, Sir Raston, in a 2-miler, this after he had opened his Cheltenham account with a win in the Triumph Hurdle.

Had the foregoing not been pieced together soon after the finish of the cross-country race, it would not hold such a prominent position.

By the time the meeting had ended on Friday afternoon, Rachael Blackmore had written herself into the record book – once again – and was quickly followed by Willie Mullins. Just when we thought Rachael had nothing more to subscribe to racing’s best-ever stories, she came along and wrote another.

Her victory aboard A Plus Tard in the Gold Cup was a first for a lady rider, and it also helped her to become the first of her gender to complete the Gold Cup/Champion Hurdle double at the same meeting, the Tipperary girl having guided the brilliant Honeysuckle to a second successive win on the opening day.

And Willie Mullins? The greatest of all National Hunt trainers had a slow start to the meeting, but finished with a flourish, his ten winners for the four days a best-ever.

Four of them came on the final day, helping Irish-based trainers to a Friday clean sweep and leaving the score between the host country and this one, 18-10. Not as decisive as last year’s 28-5, but wide enough to cause some serious head-scratching on the home front.

Another tale from the Costwolds told of racegoers being ripped off, asked to pay £7 for a pint of Guinness, twice as much for a gin and tonic, and £9 for a bag of chips.

It wasn’t that there was no-one there to buy the stuff. The attendance over the four days neared 300,000. No wonder they’re thinking of extending the meeting to five days.